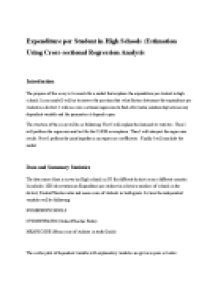 The data comes from a survey on High schools in US for different districts across different counties. In includes 1001 observation on Expenditure per student in a district, numbers of schools in the district, Student/Teacher ratio and mean score of students in tenth grade.

As we can see he standard errors of the coefficients is quite high which may be because of the correlation between the explanatory variables. Also the model shows heteroscedasticity as shown by the white test. F-statistic has a p-value of 0.00, which means that our hypothesis of  errors being  homoscedastic is rejected. As a result we make a second regression with HAC errors so that standard error for the coefficients are more efficient.

Below are two tables  showing the parameters related to the linear regression of the data. The important values are all displayed with R-square, Observations, X Variable (coefficients, t-values,       p-values

As our data is cross-sectional. So we do not have issue of covariance between error terms

The error is not correlated with regressors

The error term of in regression explains the variance which is not explained by the model. I assume the assumption is not violated as I do not have any data or theory to explain this.

The Disturbances are normally distributed