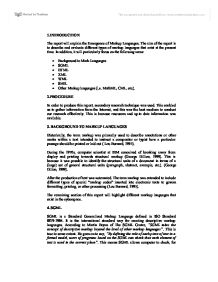 Explain the Emergence of Markup Languages.

The report will explain the Emergence of Markup Languages. The aim of the report is to describe and evaluate different types of markup languages that exist at the present time. In addition, it will particularly focus on the following areas:

In order to produce this report, secondary research technique was used. This enabled us to gather information from the Internet, and this was the best medium to conduct our research effectively. This is because resources and up-to date information was available.

Historically, the term markup was primarily used to describe annotations or other marks within a text intended to instruct a compositor or typist how a particular passage should be printed or laid out ( Lou Burnard, 1995).

During the 1970s, computer scientist at IBM conceived of breaking away from display and printing towards structural markup (George Dillion, 1999). This is because it was possible to identify the structural units of a document in terms of a (large) set of general structural units (paragraph, abstract, example, etc.). (George Dillon, 1999).

After the production of text was automated. The term markup was extended to include different types of special “markup codes” inserted into electronic texts to govern formatting, printing, or other processing (Lou Burnard, 1995).

The remaining section of this report will highlight different markup languages that exist in the cyberspace.

This proliferation of trained resources is a direct result of XML's open and standard nature.  XML training is becoming standardised, since companies can hire individuals who are trained in the open standards versus familiarity with specific products or versions of those products.  The number of training resources such as books, online training, in-person training, developer web sites, conferences, seminars, and additional means of gaining information on XML is also increasing.  With such a quantity of people walking around with XML in their heads, there is no doubt that XML will continue to have a bright future.

While getting employees and resources that are XML familiar may be increasingly easier, their familiarity with common business processes and the pitfalls that e-Commerce and e-Business efforts entail may be lacking.  A side effect of the rapid growth of the Internet generation of practitioners is that many are self-taught, and have primarily HTML and Java programming skills to the exception of others.  Most of these individuals usually have not had formal exposure to data fundamentals in general and the relational model in particular.  The rapid emergence of "green" XML developers may in essence be a setback for some that may depend on developers with the knowledge to not repeat errors made years earlier in other efforts, such as EDI.  It may not always be sufficient to find "XML experts", but to also find "business process experts" that are familiar with XML.  Hopefully, these too will be easier to find in the near future.

As mentioned earlier, XML is a technology that has no single owner or point of commercial licensing. As such, it can be freely implemented in any application or usage scenario that an organisation sees fit without incurring licensing costs.

(16) BOSAK, J, 1997, XML, Java and the future of the web [Online]. Available at: URL http://sunsite.unc.edu/pub/sun-info/standards/xml/why/xmlapps.html