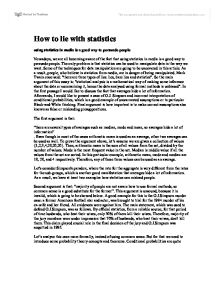 How to lie with statistics

How to lie with statistics

using statistics in media is a good way to persuade people

Nowadays, we are all becoming aware of the fact that using statistics in media is a good way to persuade people. The only problem is that statistics can be used to manipulate data in the way we want. Some of the techniques for data manipulation are going to be uncovered in this article. As a result, people, who believe in statistics from media, are in danger of being manipulated. Mark Twain once said: "there are three types of lies: lies, bare lies and statistics". So the main argument of this essay is: "statistical analysis is a mathematical way of making some inference about the data or summarizing it, hence the data analysed using formal methods is unbiased". In the first passage I would like to discuss the fact that averages hide a lot of information. Afterwards, I would like to present a case of O.J. Simpson and incorrect interpretation of conditional probabilities, which is a good example of unwarranted assumptions or in particular Black-and-White thinking. Final argument is how important is to make correct assumptions also known as false or misleading presuppositions.

The first argument is that:

A man and a blond were asked: "What is the probability that you will see now a real dinosaur walking towards you?”. The man said, that the probability is going to be one in a billion, whereas blond said that it is fifty-to-fifty, either I am going to see it or not. So this example showed that assuming something is quite dangerous thing to do, since we obtained a valid argument, but it is not sound. So this situation is also known as false or misleading presuppositions.

In conclusion, I argued both for and against the main argument of this article, mentioned in the introduction passage. Using common sense in reasoning about conditional probabilities is an example of false dilemma, whereas making almost obvious assumptions is an example of unjustified premises. These two arguments were carefully analysed and showed that proper way of using formal methods and rigorous proof will validate some issues, where common sense might mislead. However, the main argument is unsound, because it is not valid, which was shown using the fact that averages hide a lot of information.
...read more.