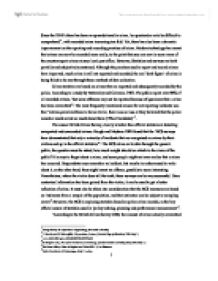 Increases in crime since the 1950's

Since the 1950's there has been an upwards trend in crime, 'so spectacular as to be difficult to comprehend'1, with recorded crime increasing ten fold. Yet, there has also been a dramatic improvement on the reporting and recording practises of crime. Modern technology has meant that crimes can now be recorded more easily, to the point that you can now in some areas of the country report crimes at your local post office. However, Statistics and surveys are both partially and subjectively construed. Although the practises used to report and record crimes have improved, much crime is still not reported and recorded, the real 'dark figure' of crime is being failed to be met through these methods of data collection. Crime statistics are based on crimes that are reported and subsequently recorded by the police. According to a study by Bottomley and Coleman, 1981, The public report over 80% of all recorded crimes, 'but some offences may not be reported because of ignorance that a crime has been committed'2. The most frequently mentioned reason for not reporting incidents was that 'victims perceived them to be too trivial, there was no loss or they believed that the police would or could not do so much about them (71% of incidents)'3. The annual British Crime Survey, clearly is better than official statistics at detecting unreported and unrecorded crimes. Hough and Mayhew 1983 found that the 'BCS surveys have demonstrated that only a minority of incidents that are recognised as crimes by their victims end up in the official statistics'4. ...read more.

Although the BCS does not measure sexual offences as a specific category, it does 'periodically include a self completion section within the survey, in England and Wales'19. The BCS provides a better reflection of the true extent of crime than statistics because it includes crimes which are not reported to the police. This can be seen from the figures collected on rape between 99-2000. 'In 99 Police recorded 7,707 incidents of rape. The 2000 BCS best estimate of the numbers of victims of rape in the last year is 61,000'20. These figures would suggest that although crime statistics are completely failing to reflect the true extent of rape, that Surveys, particularly the BCS are reflecting a more accurate figure. However, this has not always been the case, in '1983 the BCS on a study of 11,000 households, found only one instance of attempted rape!'.21 In the period of 2001/02 according to crime statistics, 'there were 8,990 reported rapes, rising to 11,441 in 2002/03, giving a 27% increase'22. At first this may look like a rapid increase, however it must be taken into consideration that in April 2002, the National Crime Recording Standard was set up. 'The NCRS has introduced a greater degree of consistency to the ways in which crime is recorded in different police forces and has helped to ensure that there is a comprehensive record of all crimes that are reported to the police by victims'23. ...read more.

Also, in the queens speech 2004 it was proposed for a radical overhaul of the police and criminal evidence act 1984, which would give 'community support officers and other police back up staff, the power to tackle anti social behaviour'31. This would free police officers for front line duty, helping to enable more crimes to be detected and recorded, subsequently reflecting a more realistic figure of crime. It can be argued that any form of information gathering can never be fully accurate. Statistics and surveys never provide a simple mirror image of the world 'out there'. Any search for consistency of the results from statistics and surveys can achieve only the 'empty shell of unprincipled uniformity'32. It is unlikely that Statistics and surveys examining crime rates, will ever accurately illustrate the true extent of crime as a social phenomenon. On a more fundamental level, the criminal statistics remain solely a list of reported offences and can never become a list which also includes the crimes which people face. They give a distorted and partial view of crime, and desperately need to be reviewed in a bid for a more accurate reflection as to the true extent of crime. Although the National Crime survey did not arrive till 1982, it has added a new dimension to our knowledge about crime and police recording practises, helping to reflect a more realistic figure of crime. Nevertheless, there is still much need for reform, in order to include a wider range of offences. ...read more.