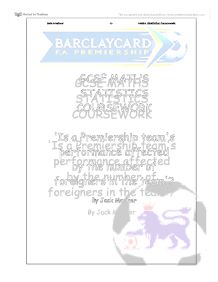 'Is a Premiership team's performance affected by the number of foreigners in the team'?

'Is a Premiership team's performance affected by the number of foreigners in the team'?

I am going to carry out an investigation into the amount of foreign players in the F.A Barclaycard Premiership.

After collecting and plotting the data on graphs and in tables, I will then analyse it to establish the bearing that foreigners do actually have on the teams' performances.

The second part of the investigation is to establish the trend of the amount of foreign players in Premiership teams. To do this I will compare the amounts of foreigners in season01/01 and season 01/02 and then analyse the data via Spearman's Rank Correlation.

I have chosen to investigate this topic because of my interest in football. I wanted to investigate something that I would enjoy doing and this appeared to be most appropriate. Another reason for choosing a football related piece was because the data could be easily attained from various sources.

The aim of this investigation is to establish the relationship between the amount of foreign players in a team and the position that the team occupies in the league.

My criterion for a 'foreign' player is one with origins outside the United Kingdom (UK) and Republic Of Ireland (Rep.Ire).

The data may not always be what I require

Starting line-ups- I have chosen to do this investigation using the teams starting eleven players because I think this is the most appropriate method. I think this because each team has a different amount of players in their squad, but every team has eleven players in their starting line-up. This way is easiest and most of all it is the fairest method.

The eleven players that I have chosen to be in my starting line-ups are players that played the most games for the team. This is the fairest way because the players represent the teams. If I were to do the teams best eleven, regardless of the amount of matches a player has played, it would give a fair representation of the club when I come to analyse the data.

Positions-the positions of the teams that have chosen to take are the positions at the end of season 00/01 and the position of the team on the 18th of March 2002. I have chosen these dates because I feel they will give me very conclusive results. The amount of foreign players in a team is certainly increasing so to attain data with high amounts of foreigners would mean to choose dates that are as present as possible.

Analysing Graphs A and B

These graphs compare the amount of foreigners per team and the position that the team occupied in the form of scatter graphs.

I conclude this investigation by stating that the amount of foreigners in a team's starting line up does have a bearing on the team's position in the league.

I also conclude that the amount of foreign player, playing in the Premiership is increasing.

This relationship between 'foreigners' and 'position' although present is not very strong. This is because of the fact that teams at the bottom of the league tend to buy foreign players that are not very good. This creates a whole different picture, giving very different results to what they might have been.

This radar graph shows the amount of foreigners per team. I have included this particular graph as I felt it was the most appropriate type for what I wanted to achieve. The graph shows how the amount of foreign players has generally increased between last season and this season. The area shows this. Straight away from looking at the graph you can establish that the area of the blue shape (season 2001/2002) is bigger then that of the green shape (season 2000/2001).