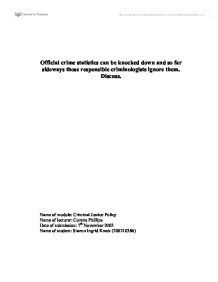 Official crime statistics can be knocked down and so far sideways those responsible criminologists ignore them. Discuss.

Official crime statistics can be knocked down and so far sideways those responsible criminologists ignore them. Discuss.

The core problem interpretating the official statistics on crimes that have been recorded by the police arise from the fact that they are incomplete and biased. For an event to be recorded and known to police category it has to overcome two hurdles: Addressing of Issues and Appropriate handling of procedures.

Criminal behaviour must come to the attention of the police and should be recorded as such by the police using his appropriate procedures. Many criminal events may fail to enter the record at either stage. They may not come to be known to the police at all, even they do, the police may not record them as crimes for variety of reasons. Therefore, the problems of non-reporting and non-recording lead to the official crime statistics becoming unreliable. (Reiner, 1996)

Many offences will fail to become apparent to police due to various social factors.  Awareness is such a problem. Some individuals, organisations or government bodies may not be aware that a crime has been committed against them.

Apart from the question of the coverage of the official crime statistics, many technical problems exist in the precise construction of the figures that may hamper the recorded numbers misleading and unreliable. (Reiner, 1996) The basic problem is transforming complex incidents into precise numbers of offences for the purpose of recording rates of crime. There are important questions to ask whereby the method in which the individual crimes are counted. Some kinds of offence tend to be repeated many times within a short period, to the extent that there may be several separate actions or people involved they may consider to form part of one concerted criminal behavior. The number of offences that should be recorded is a matter of interpretation and judgment, without a clear counting guideline, consistency will be unattainable, (Reiner, 1996) thus it will generate difficulty in comparison.

In 1980, an attempt was introduced to establish clearer rules -The instructions for the preparation of statistics relating to crime by Home Office; (Reiner, 1996; Coleman et al., 1996) nevertheless there is still room for ambiguity and discretion about accounting for crime which could bring about variations in figures.

The general rule is now that if several offences are committed ‘in one incident’, only the most serious is counted, with the exception when violence is involved, in which case the rule is ‘one offence for one victim’. (Maguire, 1997; Reiner, 1996) Though, with regard to the other offences there is only the guideline that a number of incidents which form part of the same series should be counted as one offence. This clearly

The official crime statistics, like the core object of the study-crime, is ultimately, a socially construct: (Maguire, 1997l; Coleman et al., 1996) The social culture affected people reporting behaviour; the criminal justice bureaucracies’ practice and culture influenced the recording and counting method.  By understanding more about the official crime statistics, it can help us to understand some important aspects of process of criminal justice bureaucracies as well as the role of the public. Furthermore, as we understand more about the elements of the way in which the official picture of crime is produced, it can enlighten us to develop a picture of crime, which is different from the official one, as well as to understand more about the structure and culture of society in a broader sense. (Coleman et al., 1996) However, what we have to bear in mind is, we need to understand how the data were complied and what they represent, hence, aware the pitfall of official crime statistics when we use it in developing criminological theories. To the extent, a better understanding in all forms of statistics is essential in developing theories.