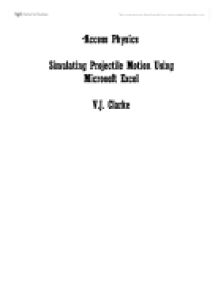 The study of the motion of a projectile, called ballistics can be simulated mathematically by use of a spreadsheet, i.e. Microsoft Excel.

To create a simulation, a few assumptions have to be made about the projectile, its launch device, and the forces acting on it in a perfect situation.

The mass of the projectile is irrelevant because the acceleration due to gravity is roughly the same wherever you are on Earth, and what ever the mass of the object.

I assumed that acceleration due to gravity was a constant 9.8 meters/s/s, that air resistance was negligible, and that the projectile itself was suitably streamlined to reduce drag.

i.e. the Muzzle Velocity multiplied by the Sine of the Muzzle’s Angle of Elevation.  Sine in trigonometric terms refers to the side opposite the known angle (θ).

The horizontal component Ux is calculated in a similar way, this time by using the formula:

i.e. the Muzzle Velocity multiplied by the Cosine of the angle (θ).

Using the vertical component, the formula  v = Uy + a t is re-arranged to find the value of t:

This re-arranged version of the formula is used to calculate the time in seconds before hitting terminal velocity, i.e. ceasing acceleration altogether in the vertical component, before the force of gravity pulls it back towards the ground.

The value of gravity used here

(These formulas are repeated to their corresponding fields all the way down the column.)

The degree of accuracy of the spreadsheet and the resulting graphs is limited by several factors.

The curve of the graph could have been smoother if the intervals had been set at less than 10°.

The computer is limited to using radians, rather than true degrees.

Formulas for converting Degrees into Radians.

As acceleration due to gravity is rounded to one decimal place, the answers are only accurate to approx. 2 decimal places.

The Excel spreadsheet is not really accurate enough for scientific purposes, and is better for business applications.