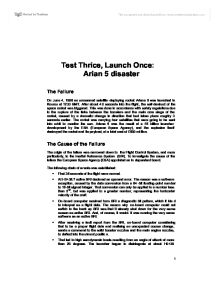 On June 4, 1996 an unmanned satellite-deploying rocket Ariane 5 was launched in Kourou at 1233 GMT. After about 40 seconds into the flight, the self-destruct of the space rocket was triggered. This was done in accordance with safety regulations due to the rupture of the links between the boosters and the main core stage of the rocket, caused by a dramatic change in direction that had taken place roughly 3 seconds earlier. The rocket was carrying four satellites that were going to be sent into orbit to monitor the sun. Ariane 5 was the result of a £5 billion launcher development by the ESA (European Space Agency), and the explosion itself destroyed the rocket and its payload, at a total cost of £500 million.

The Cause of the Failure

The origin of the failure was narrowed down to the Flight Control System, and more particularly, to the Inertial Reference System (SRI). To investigate the cause of the failure the European Space Agency (ESA) appointed an independent board.

The following chain of events was established:

So, the software for the SRI had been ported from the previous generation rocket Ariane 4. And why not? It worked fine. However, what software engineers did not consider, was that the horizontal velocity of the Ariane 5 have been up to five times faster than that of Ariane 4. Nevertheless, the SRI supplier can not be held responsible for that. It was provided with certain specifications – in the event of detected exception, the failure should be reported to the on-board computer, error context should be stored in an EEPROM memory, and the processor was to be stopped – which were successfully met. It was jointly decided not to include in the SRI requirements and specification the actual Ariane 5 trajectory. That error-handling mechanism proved to be fatal.

The board of enquiry that was set up after the incident to research and report their finding on the incident, has made a suggestion. They say that the SRI should have continued to provide its ‘best estimate’ of the craft’s attitude after the software exception has occurred. If the SRI had done this, it should have performed the conversion of the floating point number, if it was

Insufficient budget and an easy and tempting way out pushed the designers to take a shortcut and reuse the perfectly working module. The money saved – boom – the money lost.