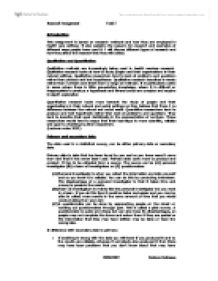 This assignment is based on research methods and how they are employed in health care settings. It also explains the reasons for research and examples of different ways people have used it.

This assignment is based on research methods and how they are employed in health care settings. It also explains the reasons for research and examples of different ways people have used it. I will discuss different types of research and how they affect the research that they will collect.

Quantitative research looks more towards the study of people and their organisations in their natural and social settings as they believe that there I no difference between the natural and social world. Quantative researchers tend to produce and test hypothesis rather than look at problems and questions. They tend to describe their work statistically in the representation of numbers. These researchers would tend to argue that their technique is more scientific, reliable and open to checking by other researchers.

The data used in a statistical survey, can be either primary data or secondary data.

This is a dangerous method to employ. The research will maintain a very close relationship with his subject but it will be based on lies. They will pretend to be someone else so they are not aware of the researcher being present, as this may change how the subject may act naturally. A researcher in appendix 1 used this.

The researcher will maintain a distant relationship with the subject and the subject may not be aware that they are being observed. This way they can get a natural view of what is happening.

This is when the researcher is not involved in the group’s activities and he maintains a distant relationship or keeps his identity a secret.

Survey Methods (used by a researcher in appendix 2)

These surveys are done more then once to see if they are compatible. They are analytic. The people chose for this are randomly picked.

You cannot draw conclusions from doing these surveys. These are created by observing and often used by social scientists.

This is done by choosing people and giving them the same questionnaire through different periods of their life and recording the changes.

Random sampling is were people complete a questionnaire and only a certain number will be picked out. But they will do this fairly so everyone will have an equal chance of being picked.

The purpose and role of research in health care is to examine the needs and provisions and get a better understanding of the society that we live in. The reasons that we comply with these procedures is to:

We observed a video in which a group of researchers studied a particular area and realised that the area was overloaded with people who had cancer or who had died of cancer, and a large majority of these people had nasal cancer. The decided they would research the area and try to find an explanation for these happenings. They discovered from looking at peoples medical records and background that they all had once worked in a wood shaving factory. They decided that this explained the situation. Because they found this through research using medical records and background records they were able to promote the dangers and risks of working in such factors and so this is a health development.

I think that research is a positive way at looking at the future. We can then examine problems that we have overcome to see why they were taking place and try to prevent them for the future. I believe that the best way to do research is from the positivists, as their way of collecting data is hard and reliable. You can also keep a distant relationship so there is no interference to the subject’s natural way of life and so the subject will not be acting falsely. I believe that the interprativist way of collecting data is very risky and may be reliable data but the risks they take for this data is remarkable.