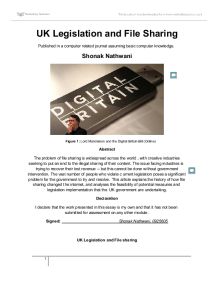 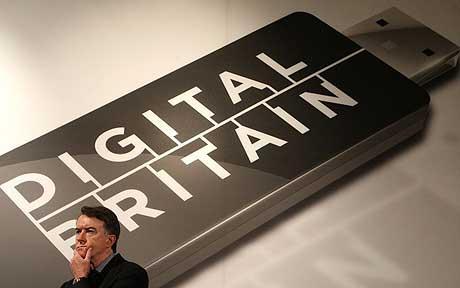 The problem of file sharing is widespread across the world, with creative industries seeking to put an end to the illegal sharing of their content. The issue facing industries is trying to recover their lost revenue – but this cannot be done without government intervention. The vast number of people who violate current legislation poses a significant problem for the government to try and resolve. This article explains the history of how file sharing changed the internet, and analyses the feasibility of potential measures and legislation implementation that the UK government are undertaking.

I declare that the work presented in this essay is my own and that it has not been submitted for assessment on any other module.

There is little denying that the way we use the internet on a daily basis has transformed our lives. The fact that we can communicate, learn and explore the wonders of the World Wide Web with just a few mouse clicks has made this remarkable technology an embedded part of our day to day doings.  Yet, our thirst for digital content, varying from music and movies, to games and applications, has resulted in an enormous upsurge in the illegal sharing of these protected works through this internet technology. The authors of copyrighted material have expressed their concern that their revenue from these works has been significantly impacted as a result. While the effect of the file sharing activity upon these authors of

So while the creative industries claim that file sharing is severely affecting their profitability, in actual fact the damage – although somewhat significant – is unlikely to have major widespread economic consequences. But what is the role of the government in file sharing, and what legislation can they impose the try and curtail this activity?

In UK law, the illegal sharing of copyrighted content is prosecutable under the Copyright, Designs and Patents act 1988. The purpose of copyright is to ensure that the author of the content benefits from his or her efforts, and it restricts what other people other than the copyright owner may do with the content. Almost any creative endeavour can now be protected by the original author under the copyright act. Any material, such as photographs, video games, television programmes and software can be copyrighted.  As soon as material is protected, people can’t exploit the work without the permission of the copyright owner, and this includes making a copy or an adaption of work; issuing copies of the material to other people; or “performing, showing, or playing the work in public or broadcasting it” (Ayres, 1999).

In the context of the internet, it’s a common misconception is that the internet is a “Copyright free Zone” (Ayres, 1999). The main reason this has come about is due to the ease of access to protected works. Consider Google, for instance. It’s the world’s most popular website and internet search engine (Alexa 2010). It’s “Image Search” service indexes billions of pictures from across the internet, and presents these images to the user and allowing the user to copy the image at their free will.