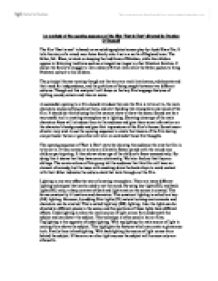 An analysis of the opening sequence of the film 'East is East' directed by Damien O'Donnell The film 'East is east' is based on an autobiographical screen play by Ayub Khan Din.

An analysis of the opening sequence of the film 'East is East' directed by Damien O'Donnell The film 'East is east' is based on an autobiographical screen play by Ayub Khan Din. It tells the story of a mixed race Asian family who live in a north of England town. The father, Mr. Khan, is intent on keeping the traditions of Pakistan, while his children oppose to following traditions such as arranged marriages to other Pakistani families. It shows the family's struggle to live ordinary British lives while the father pushes to bring Pakistani culture to his children. The principal themes running though out the story are racial intolerance, adolescents and their need for independence, and the problems of being caught between two different cultures. Though out this analysis I will focus on the key film language features of lighting, sound, camera and mise en scene. A successful opening to a film should introduce the area the film is to be set in, the main characters and something about them, and start building the atmosphere and mood of the film. It should do this by using the first camera shots to show the scene. Sound can be a very useful tool in creating atmosphere as is lighting. Showing close-ups of the main characters faces will introduce them to the audience and give them some information on the character's backgrounds and give first impressions of the film's themes. Sometimes a director may wish to use the opening sequence to create the illusion of the film having one particular theme or genre but will later on contradict those first thoughts. ...read more.

Sound can build tension and have other effects on the film that could not otherwise be obtained. Sound bridges bring the film together and make it complete. All types of sound create a world which the viewers can believe and feel apart of. Overall sound is crucial to the final feel of the film. Use of camera is key in manipulating a desired response, to the film action, from the audience. It can make the viewer focus on specific areas and the angle can suggest certain emotions. For example, if the camera is looking through the eyes of a character and the camera is doing a rolling shot from a high distance, then this suggests that the character is experiencing dizziness because they are afraid of heights. In early films, the camera did not have the ability to move or change its focus. Now there are a range of camera movements that can ensure the viewer's attention is directed to the focus of the film. There are two main groups of camera shot. These are close-ups, medium and long shots. There are four different types of close ups. These are extreme close-up, big close-up, close-up, and medium close up. They all have different effects. Extreme close ups show only the face of the person. Big close ups show a little more of the person's head. Close ups show the entire face and head as well as starting to show some of the background. Finally a medium close up displays to the audience from the head down to just below the shoulders. ...read more.

These are most commonly found and associated with northern towns like Salford. From this the audience can decipher where the film is set. The props chosen for this scene are statues of religious icons and other parade regalia. These help the viewer understand what is happening in the scene. The actors chosen by the director are real mixed race Asian children. This brings a sense of reality to the audience and again creates a more detailed film world. The costumes worn by these actors gives the audience an idea of what period 'East is East' is set in. The audience can tell from their attire that the film is set in the 1970s. Over all what is in the scene creates a believable and more enjoyable film. The audience can feel that they know about the characters life style from just looking at what they wear and where they live. It helps the audience make decisions about what they should feel about a character. The colour and style of the characters clothing emphasize those feelings. Altogether mise en scene really makes the film more real. Overall the impact that the opening scene has on the audience is important and the opening to 'East is East' fulfills all the criteria of a film introduction. It set the scene, it introduced us to the main characters and showed as a little about them. The camera shots, lighting, sound and mise en scene all work together to make this a successful opening. In my opinion no element of film is solely responsible for making the opening sequence of this film successful. They all must work in concert to make the film successful. ...read more.

This is a very brief conclusion, but it does give the discourse a pleasing circularity: Near the beginning of the essay the author lists a series of features of a "successful" opening sequence for a film, and the essay does demonstrate how the beginning of East Is East adheres to those principles. It would have been better if the list of key characteristics came from an authoritative source and if the essay itself had more systematically linked every detail of the film that it explored to that list, but it is nonetheless a good structure for an essay.