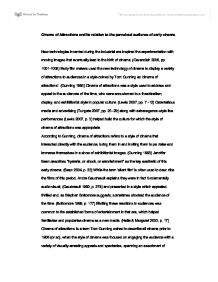 Cinema of Attractions and it relation to the perceived audience of early cinema. Early film makers used the new technology of cinema to display a variety of attractions to audiences in a style coined by Tom Gunning as cinema of attractions.

Cinema of Attractions and its relation to the perceived audience of early cinema New technologies invented during the industrial era inspired the experimentation with moving images that eventually lead to the birth of cinema. (Cavendish 2008, pp. 1001-1008) Early film makers used the new technology of cinema to display a variety of attractions to audiences in a style coined by Tom Gunning as 'cinema of attractions'. (Gunning 1993) Cinema of attractions was a style used to address and appeal to the audiences of the time, who were accustomed to a theatricalism, display, and exhibitionist style in popular culture. (Lewis 2007, pp. 7-12) Ostentatious media and advertising (Tungate 2007, pp. 25-29) along with extravaganza-style live performances (Lewis 2007, p. 3) helped build the culture for which the style of cinema of attractions was appropriate. According to Gunning, cinema of attractions refers to a style of cinema that interacted directly with the audience, luring them in and inviting them to partake and immerse themselves in a show of exhibitionist images. (Gunning 1993) Jennifer Bean describes "hysteria, or shock, or astonishment" as the key aesthetic of this early cinema. (Bean 2004, p. 23) While the term 'silent film' is often used to describe the films of this period, Andre Gaudreault explains they were in fact fundamentally audio-visual, (Gaudreault 1990, p. ...read more.

(Tungate 2007, pp. 29-31) The widespread use of eye-grabbing advertising meant that the audience for cinema of attractions were a people used to having their attention drawn by images and display. (Fox 1997, pp. 66-68) The use of spectacle and display in cinema of attractions fit well into an era where popular culture involved ubiquitous exhibitionism. Ostentatious advertising is not the only source to be credited for the culture of prominent exhibitionism at the time of cinema of attractions. Increased wages and leisure time towards the end of the nineteenth century meant that the population had the means by which to seek pleasure and entertainment. This entertainment commonly took the form of live performance. (Halle & Margaret 2003, p. 17) Theatre had long been popular, but in the era leading up to the beginning of cinema, shows that leaned heavily on the use of spectacle and exhibitionism were widely popular. (Lewis 2007, pp. 7-12) These shows usually came in the format of variety- acts, with minstrel shows, burlesque, vaudeville and musical comedy all becoming popular offshoots of theatre. (Lewis 2007, pp. 7-12) These forms of entertainment sought to create a wide range of strong reactions in the audience; using anything from comedy to dance and song, to stunts and tricks, to nudity and even vulgarity in order to draw out an audience response. ...read more.

(Gaudreault 1990, p. 275) According to Gaudreault, these live, unique audio additions to the imagery of the film helped to form a sense of presentness with the audience, addressing them directly and involving them in the immediacy of the entire production. (Gaudreault 1990, pp. 274-275) Tom Gunning explains that cinema of attractions did not place the audience in the position of a neutral voyeur. The cinema showman invited the audience to participate. The exhibitionism of the imagery used combined with the live audio performance inspired captivation and awe. And all of these elements combined to showcase the technological capabilities of cinema as a new media. Gunning says it was the "technological means of representation that constituted the initial fascination of cinema". (Gunning 1993) The technological, industrial and cultural developments leading up to the late nineteenth century and the beginning of cinema, informed the style of cinema early film makers used, referred to as cinema of attractions. Taking into account the widespread use of eye-grabbing media and the popularity of theatricalism and exhibitionism in live theatre; and with the purpose of showcasing the technological capabilities of film as a new form of media; filmmakers used the style now known as cinema of attractions to address the perceived audience in early cinema. Providing an audio-visual spectacular appealed to the culture of the audiences of the time, and derived audience reaction which helped the widespread popularity and success of cinema as a new form of entertainment. ...read more.

The conclusion is weak in comparison to the rest of the essay, which is a detailed, well researched and relatively insightful analysis of the cultural context of the cinema of attractions.

What the conclusion mostly lacks is the acknowledgment that contemporary cinema is in many ways still the cinema of attractions, because it shares the same aesthetic aims, for the same reasons. In fact, what has changed? The most significant difference is not that the techniques and technologies have changed, because a progressive sophistication of technology is implied in the aesthetic of the original cinema of attractions. If one looks carefully, one sees that the most significant change is how passive the audience has become, how our participation in the spectacle has gradually been reduced...

On the whole, an excellent essay that could be improved by a more critical grasp of the cultural theories that it touches upon. To me, what is lacking here is a sense of how this mode of cinema is an expression of the ideological framework of industrial society, and how these ideologies persist in the capitalist society which came to dominate Europe and America.