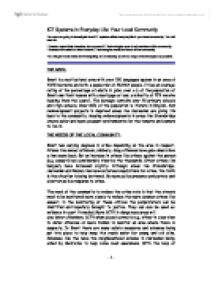 ICT Systems in Everyday Life: Your Local Community You are now going to investigate how ICT systems affect everyday life in your local community. You will need to: * Create a report that describes four or more ICT technologies open to all members of the community. * Evaluate the extent to which these ICT technologies meet the needs of the community. You will gain most marks for investigating and evaluating as wide a range of technologies as possible. THE AREA: Brent is a multicultural area with over 100 languages spoken in an area of 4325 hectares and with a population of 263464 people. It has an average rating of the percentage of adults in jobs, over a 1/4 of the population of Brent own their houses with a mortgage or loan, a minority of 10% receive housing from the council. The borough contains over 20 primary schools and High schools. Over 80% of the population is literate in English. And redevelopment projects in deprived areas like Harlesden are giving life back to the community. Housing redevelopments in areas like Stonebridge create safer and more pleasant environments for the tenants and owners to live in. THE NEEDS OF THE LOCAL COMMUNITY: Brent has varying degrees in crime depending on the area in respect. ...read more.

CCTV uses a series of coaxial cables and records the images onto a hard drive to be reused at later date. Since installation of CCTV in problem areas, police say crime rates have dropped. The use of CCTV is regulated by a series of rules in the privacy protection act. EVALUATION INTO THE EXTENT THAT THE TECHNOLOGY MEETS THE COMMUNITIE'S NEEDS: Brent has a need for CCTV as it is an area that is plagued by gangs, drug crime, gun crime and other forms of crime such as vandalism. The installation and monitoring of CCTV will help as it will deter offenders and it will help sentence criminals when used in court as evidence. CCTV also helps build up a picture of the crime rate of the area. Although CCTV is expensive and quickly becomes redundant and the older versions do not record in real time. CCTV meets the need I've identified by monitoring areas and helping make a better and safer area for people to live in. It does not meet the need as CCTV is restricted by the location it is placed in. When placed openly it may deter criminals but it might push offenders into a different area without CCTV therefore causing problems for that area. ...read more.

Digital TV's today are advanced and slim, with high resolution images and many channels. Shops that offer internet surfing and game consoles with coffee and other things are now commonplace on the high street. The first major home console was the playstation also from Sony. It revolutionized the gaming industry offering high resolution graphics at home. Other companies soon followed after such as sega and Microsoft. Mp3 players are now available as slim and portable devices with USB storage capabilities. The internet allows people to communicate with each other and access fun things. EVALUATION INTO THE EXTENT THAT THE TECHNOLOGY MEETS THE COMMUNITIE'S NEEDS: When these entertainment technologies are employed and installed in places like youth clubs and after school activities they can aid to combat the increasing number of young offenders on the street. In this way the offenders are kept from offending, kept occupied and do recreational activities, hopefully peacefully interacting with people. The other form of entertainment would come in the form of sports centres that would serve a similar purpose as entertainment technologies; they would occupy these offenders keeping them off the streets and giving them a recreational activity to do. Activities such as listening to music watching a movie, while not useful to them in the long run is good for the community as it provides yob free streets. ?? ?? ?? ?? - 1 - ...read more.