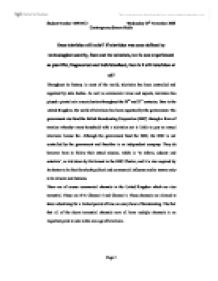 Does television still exist? If television was once defined by technological scarcity, flow and the schedule, but is now experienced as plentiful, fragmented and individualised, then is it still television at all? Throughout its history, in most of the world, television has been controlled and regulated by state bodies. As well as commercial value and aspects, television has played a pivotal role in socialisation throughout the 20th and 21st centuries. Here in the United Kingdom, the world of television has been regulated by the government. The government also fund the British Broadcasting Corporation (BBC) through a form of taxation whereby every household with a television set is liable to pay an annual television license fee. Although the government fund the BBC, the BBC is not controlled by the government and therefore is an independent company. They do however have to follow their stated mission, which is 'to inform, educate and entertain', as laid down by Parliament in the BBC Charter; and it is also required by its charter to be free from both political and commercial influence and to answer only to its viewers and listeners. There are of course commercial channels in the United Kingdom which are also terrestrial. These are ITV, Channel 4 and Channel 5. These channels are allowed to show advertising for a limited period of time on every hour of broadcasting. ...read more.

An even more recent development of recording and storage systems within digital TV services is that of the 'On-Demand' service. This was first made widely available to watch on your television by Virgin Media. The principle of 'On-Demand' is that the set top box automatically stores certain programmes; however they are of the choice of the digital television supplier, which are then available for the viewer to watch whenever they wish within a set period of time. For example, on Virgin On-Demand, episodes of EastEnders are saved for a full week. As well as giving the viewer the choice of when they wish to view the programme without consciously having to set it on to record, as is necessary with recording facilities, it gives the service the vital element of 'Catch Up' which is important for many people in their busy and contemporary lifestyles. Sky Plus have also recently introduced their 'Anytime TV' facility which has the same function as that of Virgin, however it is notable that Sky mostly records and stores movies as opposed to television programmes. BT Vision also has their own version called Vision TV, which also records movies and programmes, but also stores full series and seasons of popular television shows such as 'Lost'. These features of digital television inevitably lead to another important development in the world of available and on demand television, the online media player. ...read more.

(Jones in Mathijs & Jones, 2004.) Many programmes have their own websites and a variety of different ways in which the viewer can interact with the programmes. Big Brother is a prime example of an interactive multi-platform television programme. The show allows for viewers to access information and participate in voting and opinion based sessions in a number of different ways such as broadcast, internet, interactive TV, mobile SMS and MMS, tabloid narratives, landline phone and so on. Overall it is true to say that television is still very much in existence however the form in which it is broadcast to the nation has changed and is continuing to change dramatically as time goes on. Television is no longer ruled by schedules and terrestrial channels. Instead it is controlled by viewers who are subsequently changing the way television is produced, its content, form and mode of broadcast. Gone are the days where people set their alarms in order to watch the latest episode of their favourite programme, instead, television is made readily available for those who wish to see it whenever and ever more importantly, wherever they want. It is not uncommon to see people watching TV on their laptops or phones on trains and in other public places. Viewers are demanding what they want to watch therefore broadcasters are having to make their programmes on demand in order to prevent the use of file sharing and peer to peer sites. Television does still exist, however its fundamental definition is most definitely changing. ...read more.