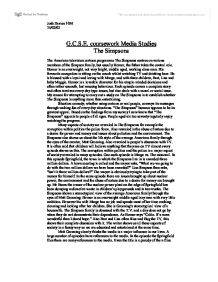 G.C.S.E. coursework Media Studies The Simpsons The American television cartoon programme The Simpsons centres on various members of the Simpson family, but usually Homer, the father takes the central role. Homer is an overweight, not very bright, middle aged, working class man. His favourite occupation is sitting on the couch whilst watching TV and drinking beer. He is blessed with a loyal and loving wife Marge, and with three children, Bart, Lisa and baby Maggie. Homer is a loveable character for his simple-minded decisions and often rather uncouth, but amusing behaviour. Each episode covers a complete story and often involves every-day type issues, but also deals with a moral or social issue. My reason for attempting to carry out a study on The Simpsons is to establish whether The Simpsons is anything more than entertaining. Situation comedy, whether using cartoon or real people, conveys its messages through making fun of every day situations. ...read more.

The Simpsons shows a stereotypical view of the average American family through the eyes of Matt Groening. Homer is an overweight middle-aged lazy man with very little ambition. However his wife Marge has no job and spends most of her time cooking, cleaning and looking after her children. She is Groening's stereotypical view of a housewife. The Simpson family is obsessed with the T.V. and a day does not go by when they do not demonstrate their dependence. As Homer says "Cable. It's more wonderful than I dared hope." Also Bart and Lisa often Kiss and Hug the TV, this shows their complete obsession with it. The writer shows us all these aspects of society in a funny way so we are educated and entertained at the same time. Matt Groening clearly thinks the media is a major influence in our lives. A large number of episodes have references to the media. ...read more.

Also visual devices are of equal importance. They also help with our appreciation and understanding of The Simpsons. A good example of this is when Bart is being stalked by Side show Bob, Homer wears a t-shirt that reads, "Witness relocation program". This is silly when people are put on the witness relocation program they are meant to start a new life and nobody is meant to know about it. It is put there to entertain the viewer and make the viewer laugh. Another example is the opening sequence of the episode Marge vs. the monorail. This sequence is a parody of the opening sequence of The Flintstones. Homers actions are a modern day copy of what Fred Flintstone does. This is also very funny and entertains the viewer. The Simpsons is more than entertainment. It is extremely funny and attracts viewers of all ages and cultural backgrounds from many different countries. Yes the Simpsons is a very witty and funny program it uses joke on all different levels so everyone will find it funny. The Simpsons also use visual devices sound and media references to add to our enjoyment. ...read more.