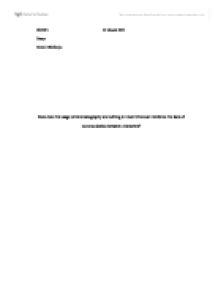 How does the usage of cinematography and editing in Michael Haneke's &quot;Code Unknown&quot; reinforce the lack of communication between characters?

FS1505 22 March 2011 Essay Emmi Makiharju How does the usage of cinematography and editing in Code Unknown reinforce the lack of communication between characters? Code Unknown: Incomplete Tales of Several Journeys is the most technical film of Austrian director Michael Haneke. Haneke is known for his minimalist approach both in technical and artistic terms. His editing is always meticulous and the cinematography and narratives are eccentric to say the least. Code Unknown follows the lives of four characters and their families who manage to somehow create havoc to each others existence. The film is composed of 46 scenes of which most are tracking shots, the longest lasting approximately nine minutes, without cuts. The scenes are abruptly cut, separated by a black screen that creates a mosaic reality, which is also visible in the narrative of the film. (Horton 2001) Haneke's films scrutinize the modern world, and Code Unknown especially explores communication and its importance in society and alienation that the contemporary world creates. The most visible form of cinematography in the film Code Unknown is the long take. Nearly all scenes are made with few or no cuts. The long take is an alternative to a series of shots, and is a strong creative resource. ...read more.

Haneke gives his viewers little pieces of information in every scene, which he expects the viewer to put together. The characters will never meet each other or learn of the others fates, even though the viewer is desperately waiting for this to happen. The blunt editing and even the lack of it hints that Code Unknown is only a presentation of different characters and their actions towards each other. Haneke uses other forms of editing on top of his blunt cutting methods. The montage presentation of photograph still lifes with narration is an interesting disunity to the rest of the film. The first set of approximately 20 photographs that represent the terrors of war in Eastern Europe are 2 presented with Georges reading a letter in the background. The narration and the photographs are both passive ways of storytelling, which again emphasizes the lack interaction between characters. The second set of photographs are shots secretly taken of exhausted people sitting in the Underground of Paris. The way they are portrayed, alone and in deep thought installs a sense of alienation into the viewer. All the characters in the film are usually presented on their own or with strangers. ...read more.

The scene of her ironing has a far medium shot of her that shifts the attention, in this case, to the screaming heard from upstairs. Anne is not the main character of this scene anymore, it is the girl screaming, even though she is never shown on camera. Michael Haneke makes it difficult to uncover the meaning in Code Unknown, but with the help of editing and cinematography the themes of miscommunication and alienation can be discovered. Haneke uses his technical craftsmanship to slowly help the viewer to realize the purpose of the movie. Cinematography in the form of a tracking long take emphasize the lack of communication and interaction between characters and the static medium shots make it obvious that the main characters are not always the most important parts of a scene. Abrupt editing creates a cracked, incomplete feel to the film that makes the viewer fill in the blanks, and the two disunities, such as the still lifes and the scenes of The Collector, reinforce the relationship between cinematography and editing in the film. Andrei Tarkovsky has said that "the true artistic image is always based on an organic link between idea and form" (Tarkovsky 1989, p. 26), and Haneke does just that. He supports his ideas with his technicality. ...read more.

A few instances of poor grammar, and a few instances of repetition, but on the whole a very insightful and well written piece of analysis. The essay lacks insight into the Marxist beliefs of the film-maker and the Marxist origins of some of his cinematic devices and techniques, e.g. dialectic montage.

While this does prevent the author from noticing how critical this film is of middle-class values in particular, it does not prevent them from grasping the reasons Haneke uses these techniques and devices. I'd award the essay as it stands a solid 4 stars (high 2.1)