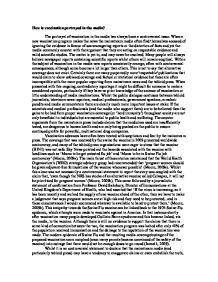 How is vaccination portrayed in the media?

How is vaccination portrayed in the media? The portrayal of vaccination in the media has always been a controversial issue. When a new vaccination program makes the news the mainstream media often find themselves accused of ignoring the evidence in favour of scaremongering reports or the distortion of facts and yet the media commonly counter with the argument that they are acting on respectable evidence and valid scientific studies. The matter is yet to, and may never be resolved. Many people will always believe newspaper reports containing scientific reports whilst others will remain sceptical. Within the subject of vaccination in the media new reports consistently emerge, often with controversial consequences, although some become a lot larger than others. This is not to say that alternative coverage does not exist. Certainly there are many purportedly more 'respectable' publications that would claim to show unbiased coverage and factual or statistical evidence but these are often incompatible with the more popular reporting from mainstream news and the tabloid press. When presented with this ongoing, contradictory reportage it might be difficult for someone to make a considered opinion, particularly if they have no prior knowledge of the science of vaccination or little understanding of media machinations. Whilst the public dialogue continues between tabloid journalists, television news reporters, medical professionals, government speakers, armchair pundits and media commentators there are clearly much more important issues at stake. If the scientists and medical professionals (and the media who support them) are to be believed then the gains to be had from proper vaccination coverage (or 'herd immunity') ...read more.

Measles is a disease which thrives in dense populations and in circumstances where malnutrition is common, can achieve a fatality rate of 20%. Measles can also lead to severe complications in the host and can develop into measles encephalitis, which in turn can lead to brain damage. More commonly the host can experience convulsions and aural infections. Mumps was first effectively vaccinated against in 1967 and carries with it less potential for public health risk than measles or rubella. The disease (whilst very unpleasant) is rarely serious although it can lead to orchitis in males, which in turn can lead to sterility. Rubella (or German Measles) was first described in 1619 and although not as serious as measles is considered to be an important virus to be immunised against. Whilst rubella differs from other childhood diseases in that it rarely has any direct consequence on the health of the host it is considered a serious disease due to its effect on unborn children and can pose severe problems to the development of a foetus in utero. The ethical problem posed by this situation requires that boys be immunised as well as girls in order to ensure that 'herd immunity' is maintained, i.e. to decrease the chances of passing the disease to a female who has herself not been immunised (Senn, 2003). Studies into a combined MMR vaccine began in Finland in the 1970s after common epidemics of all three viruses, leading to many deaths, cases of sterility and congenital birth defects. ...read more.

To put it another way, if none of the children had received MMR this would (accepting the other weaknesses of this form of study) be an indication that MMR had a protective effect against autism. (Senn, 2003:221) After the actual evidence and methodology behind the trials had been forced into the public eye and was sufficiently scrutinised, along with reports that Wakefield himself had been struck off over malpractice over charges of bringing his profession into disrepute, along with claims that his studies had also been affected by a conflict of interests which involved a �55,000 grant, it became difficult for the media to continue their supportive campaign for his efforts. The Telegraph, who in 2002 had described Wakefield as a 'handsome, glossy-haired charismatic hero' (Picardie, 2002) now called for greater scrutiny of medical practitioners. The Sun ended its 'give us a choice' campaign (which had called for the right to opt for multiple vaccines over the triple jab) whilst the Daily Mail disregarded all evidence and continued to publish stories which linked the MMR vaccine to autism for many years after (O'Neil, 2006). Private Eye was one publication who had sided with Wakefield against what it purported to be a controlling and pernicious health authority which had something to hide, in its special supplement published with its regular issue. In response the British Medical Journal affirmed in a press release that: The Eye report is dangerous in that it is likely to be read by people who are concerned about the safety of the vaccine. ...read more.