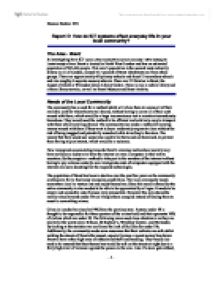 Report D: How do ICT systems affect everyday life in your local community? The Area - Brent In investigating how ICT systems affect everyday life in my local community I will be studying the London borough of Brent. Brent is located in North West London and has an estimated population of 263,464 people. This area's population is the second most culturally diverse in all of London, around 54.7 percent of Brent inhabitants are from ethnic groups. There are approximately 60 primary schools and about 15 secondary schools and also roughly 4 separate nursery schools. There are 12 libraries in Brent, the largest of which is Willesden Green Library Centre. There is also a mobile library and a home library service, as well as Brent Museum and Brent Archive. Needs of the Local Community The community has a need for a method which will allow them to access all of their available cash for when they travel abroad; without having to carry all of their cash around with them, which would be a huge inconvenience not to mention tremendously hazardous. They would need the method to be efficient and relatively easy to transport with them while travelling abroad. The community also needs a method of carrying money around with them if they want to buy a moderately expensive item without the risk of being mugged and potentially assaulted while travelling to the store. ...read more.

ATM machine as it may not be able to read a foreign card (other than visa which can be used in most places in Europe).Therefore it is compulsory that the people in the community manually obtain the cash by contacting the clerk in the local branch which might be detrimental if you do not want anyone else to know your bank details and want also to maintain privacy. Generally, I find that the community has greatly improved due to the ATM technology as its grants a greater freedom to ATM users as they can obtain cash from practically any main road in Brent. Also the increased use of ATMs globally could lead to lower interest rates on loans for international banks which would be very helpful to everyone. However my main concern is the use of the technology outside of the country as factions are known to have been formed solely to obtain bank details. But this can be avoided by carrying cash but you may get mugged, or by persuading foreign people in power to take the necessary steps to control the situation. Closed-Circuit Television Description of Technology Closed-circuit television (CCTV) is the use of video cameras to transmit a signal to a specific, limited set of monitors. It differs from broadcast television in that the signal is not openly transmitted, though it may employ point to point wireless links. ...read more.

Evaluation of Technology Overall, I find internet cafes to be very useful for those who do not have access to the internet otherwise as it is very inexpensive. I think that this technology is excellent at educating people of ICT since it gives the community a chance to socialise (with e-mail). It is considerably better for learning than if the person owns their own computer (since it costs less for them and they usually have an expert for help). An internet cafe is also great for gaming as well because of its multiplayer facilities and the quality sound system which can be found in most gaming caf�s across Brent. However, it might not be a good idea to give your personal details on a computer which you do not own yourself because the computer may not have a satisfactory internet security installed to protect the user from all the hackers on the internet. Then again, the technology is good for research since the pricing is moderately cheap in comparison to some newspapers and magazines and the information can be printed or saved on a USB pen drive for future use. Unfortunately, customers would not b able to visit online banking sites as their surfing details are usually monitored. Another disadvantage is that the internet cafes are not open 24/7 so if you urgently need to use the internet and you don't have the facilities at home, you would be having difficulties. ?? ?? ?? ?? Hannan Hashmi 10N - 1 - ...read more.