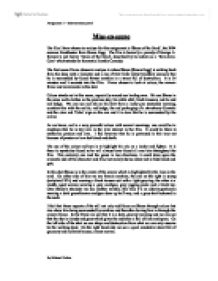 Mise-en-scene. The film I have chosen to analyse for this assignment is 'Shaun of the Dead', the 2004 summer blockbuster from Simon Pegg

Mise-en-scene The film I have chosen to analyse for this assignment is 'Shaun of the Dead', the 2004 summer blockbuster from Simon Pegg. The film is basically a parody of George A. Romero's cult horror 'Dawn of the Dead', described by its makers as a 'Rom-Zom-Com' which stands for Romantic Zombie Comedy. The first scene I have chosen to analyse is where Shaun (Simon Pegg) is walking back from the shop with a Cornetto and a can of Diet Coke whilst blissfully unaware that he is surrounded by blood thirsty zombies in a street full of destruction. It is 26 minutes and 5 seconds into the film. I have chosen to look at colour, the camera frame and movements in this shot. Colour stands out in this scene, especially around our leading man. We see Shaun in the same work clothes as the previous day, his white shirt, black trousers, red tie and red badge. We can see red ink on his shirt from a leaky pen yesterday morning, combine this with the red tie, red badge, the red packaging of a strawberry Cornetto and the clear red 'Coke' sign on the can and it is clear that he is surrounded by the colour. ...read more.

This builds up both the zombie and the comedy part of the genre in that this is a scene you wouldn't expect to see on your doorstep, both funny and scary. The camera movement is important because it constantly follows Shaun at a medium close up level (elbows up) and just like him, remains oblivious to the shocking events going on. This only builds upon his character as the hero and main star of the show, and it could be said that it is following him as the love interest of the film and almost suggesting that the death and violence in the background is not the main part of the film. Another major aspect of this scene is the fact that it is almost identical to the scene the previous morning. Shaun makes a similar journey the previous day and the producers have tried to recreate this only changing the effects that the zombies have had. This is to symbolise the character's mundane and uneventful life coming to a head and going through some serious changes. The second scene I have chosen to use takes place 1 hour 6 minutes and 31 seconds into the film. ...read more.

The window has a blind attached at the top which I think has been put there to act as a blinker to Shaun so that if he wanted to he could pull down the shutter and all would be forgotten. The idea of two frames and two worlds creates an idea for the audience that this second world can be shut out and can be separated if so wanted. The camera is held at an angle here where we can see clearly what Shaun is playing with on the wall, and see the entire window behind him. The film makers wanted this highlight Shaun's ignorance which helps to maintain the comedy element of the genre. The fact that it is dark now drives the issue of time forward as when they arrived at the pub it was still Sunday morning. I feel from the way this and scene 1, have been set up, the creators clearly focussed on comedy. The symbolic codes they used to create the horror element have all come from previous zombie films. The whole film can be seen as a cultural reference to classic horror, although the overwhelming inspiration of it's near name sake, can be seen throughout. Assignment 1 - Mise-en-scene part 2 By Michael Perkins ...read more.

This is a very weak conclusion to an otherwise pretty good analysis of the way that elements of the mise en scene contribute to the audience's understanding of onscreen events.

Though it's based on two quite good observations (it's true that the film-makers downplay the horror in order to accentuate the comedy; it's true that nearly everything in the film is a reference to another zombie film) the way that these two important facts is introduced is abrupt and lacking in further explanation. It would have been good if the author had told us at the beginning of the essay that these were the points they intended to argue; then we could have read the essay as proof of this hypothesis, and the conclusion could have offered some reflection upon why the film-makers chose this approach for instance...

If this is an undergraduate essay, 2 stars because of the lack of theory reference, bibliography and proper use of the technical language of film.

If this is an A level essay, 3 stars for the detail and insight of the analysis itself.