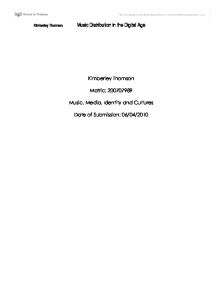 “When Western technology, at the end of the nineteenth century, made possible the recording of sound... it invested music instead of aiding institutions’ power to perpetuate themselves; everything suddenly changed.  A new society emerged, that of mass production”.  (Attali, 1985: 87).  With particular emphasis applied to the advent of the digital age, I will investigate how technologies have altered the standard models of distribution and subsequently changed the economies regarding the international music industry.  I will explore the relationship between digital music distribution services and the shift in power in the music industry, with reference to the economics of music distribution in the digital age.

With the rise of the internet and peer-to-peer (P2P) technology, the foundation for vast media file-sharing online was established, leading to the creation of online business models.   P2P networks connect online users with one another and allow them to share files while also being connected directly to artists.  The use of peer-to-peer networks for music file-sharing became popular after the emergence of Napster.  Napster software was released free in 1999 and allowed users to connect to each others’ hard drives and share MP3 files (Hill, 2003: 258).  Napster and other such P2P networks are products of various technological advances.  The “development of the MP3 standard by the Fraunhofer Gesellchaft provided a compression of music files to a twelfth of their original size” (Strang, 2008: 4) - based on the popular bit rate of 128 kbps.  This is crucial as it enables users to condense their computer memory use, thus permitting a larger number of files to be shared.  This allows distributers to sell music via online distribution services.  In recent years we have witnessed a number of music stores going out of business, such as Fopp and Tower Records.  In 2008, more than a quarter of independent music stores within the UK experienced bankruptcy (Topping, 2009).  The number of traditional high street retailers will continue to fall as online distribution continues to be consumers’ preferred method of acquiring music.

The internet is the prime catalyst in the sharing of music on a global scale.  Other technological advances have aided in this growth, such as the development of high-bandwidth internet connections which rapidly increase the downloading and uploading pace.  As author, Strang, states: “the introduction of so-called ‘multi-media’ computers with more storage capacity, built-in soundcard, speakers and CD-burner facilitated the storing and play-back of digital music files”.  This was assisted by the “availability of - mostly free – software applications to transfer CDs into MP3s [as this] made it easy for users to contribute” (Strang, 2008: 4) to the now continuous cycle of music distribution over the World Wide Web.

However, portability, social networking and unlimited music streaming “currently presents different problems, related to the different market actors and sectors.  Up to now, the major problems have been identified in the market structure” (Ng and Nesi, 2008: 339) as this colossal transformation in how we consume music presents vast debate concerning who should own rights to music and how it should be distributed.  Technological innovation and the digitization of music content means consumers are now free to download music at no cost and at their own leisure, thus the traditional methods of distribution can no longer be sustained economically.  Stakeholders of the traditional supply chain that have been affected drastically include record companies and retailers, as well as artists.

Until recently, record labels have had almost complete control over artists for a contracted period of time, as this was virtually an artist’s only means to success.  Many artists are not signing away their rights like they used to, as the impact of the digital age presents certain advantages for unsigned artists who can be promoted to consumers via P2P networks and through authorized online downloading.  In 2007, Radiohead released their album, In Rainbows, as an online digital download, completely independent from any record label.  This improved the band’s relationship with consumers, who were free to pay as much or as little as they liked for the download.  However, with such advantages, immensely detrimental facets are also in attendance.  Namely, the economic relationship between artists and consumers has changed rapidly, and although “the net makes it possible for artists to handle parts of music creation and distribution process” (Calvin and Tan, 2001: 66), many will lose vast amounts of income through the wholesale distribution of copyrights.  For example, regardless of the fact that Apple does not own music itself, it makes immense profits via its online iTunes Store.  This is legitimate as the company has licensed rights to distribute music from the large media conglomerates such as Universal, Sony, Warner and EMI, which together currently control the distribution of over 70% of the world’s music (Jobs, 2007), while artists themselves do not receive fair compensation.
This process of sharing online is transforming the traditional distribution chain from a physical to a virtual Music-on-Demand model (
Hill, 2003: 4).  The global sharing of music online is aided by the growth of P2P networking sites such as Napster and Spotify.  This has caused a model shift as the international music industry is now largely driven by advertising agencies.  Spotify - a digital music server funded by advertising revenues - allows users free instant access to over eight million songs.  It also offers a subscription service for users who wish to access the large music catalogue without the interruption of adverts.  Artists featured are from record as well as independent labels.  Our understanding of economies relating to the international music industry has hence altered, as it seems far more viable that local artists will succeed without having to offer a unique persona to a record company in order to be offered a contract, and without the need for excessive wealth if they wish to manage their own music recording, promotion and distribution.

Consumers have demanded that music be a free market due to the infinite amount of illegal downloads.  Such economics demanded that a shift be made, thus music distribution funded by advertising agencies has risen and will continue to do so in the future.  Yet the availability of music streaming and downloading funded by such means has not stopped consumers from downloading music illegally.  Actions have been taken in the hope of protecting music content in the digital world.  For example, the Digital Millenium Copyright Act of 1998 was brought into action in the US.  This act offered “protection for online service providers” and “prohibition against the circumvention of technologies that control access to copyrighted works” (Crews and Buttler, 2005: 93).  Despite such laws, consumers still continue to engage in copyright infringement.

Attali states that “Recording has always been a means of social control, a stake in politics” (Noise, 1985: 87), and those who have lost such powers to a degree due to the downloading era have made efforts to regain that power.  Record companies have argued that consumers’ engagement in such activities could lead to the downfall of the music industry.  Indeed, there has been a significant decline in record sales.  Zentner (2005) found that “countries with greater internet capacities have higher losses in music sales” (2009: 11).  One would argue that it is unlikely that digital subscription services and advertising models will grow to such an extent as to compensate for the tremendous decline in CD sales in the foreseeable future.

Overall, technological innovation has altered the power of record labels and large media conglomerates such as Universal, Sony, Warner and EMI.  Music has become a virtual, interactive experience and is now thus a central feature of the global economy.  The future of music distribution on the internet currently presents problems concerning profits and losses for artists, record companies and retailers.  As world music is distributed globally, debates regarding who should own rights to such music will continue.  As large media conglomerates profit from their music, their concern to protect music content has and will continue to grow.  (Titon et al, 2009: 26).  The traditional distribution model of the international music industry is at stake as the availability of music online has radically altered the future of music distribution.  The online music industry will continue to grow as consumers persist to shift their method consuming music and bypass traditional commercial channels.

Titon. J et al, (2009) Worlds of Music: An Introduction to the Music of the World’s Peoples, Florence, Cengage Learning.