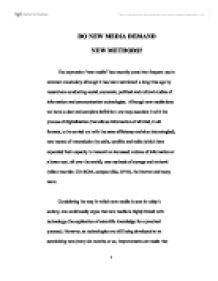 DO NEW MEDIA DEMAND NEW METHODS? The expression "new media" has recently come into frequent use in common vocabulary although it has been mentioned a long time ago by researchers conducting social, economic, political and cultural studies of information and communication technologies. Although new media does not have a clear and complete definition one may associate it with the process of digitalization (that allows information of all kind, in all formats, to be carried out with the same efficiency and also intermingled), new means of transmission by cable, satellite and radio (which have expanded their capacity to transmit an increased volume of information at a lower cost, all over the world), new methods of storage and retrieval (video recorder, CD-ROM, compact disc, DVD), the internet and many more. Considering the way in which new media is seen in today's society, one could easily argue that new media is highly linked with technology (the application of scientific knowledge for a practical purpose). However, as technologies are still being developed at an astonishing rate (every six months or so, improvements are made that bring new possibilities in the collection, storing, processing and transfer of information), a precise and stable definition of new media is quite impossible to give. ...read more.

And because "the easiest thing in the world for a reader is to stop reading" (Bernard Kilgore cited in The Wall Street Journal, 2009) Bernard Kilgore decided, at the time he started managing The Journal (The Wall Street Journal from today) in 1941, to adopt a new method, a new strategy: "It doesn't have to happen yesterday to be a news." (Bernard Kilgore cited in The Wall Street Journal, 2009). Basically, what Kilgore did was, instead of summarizing what was already known by the audience, to focus at the implications (social, political or economical) of an event, that was the subject of news, might have for the society. Kilgore was not able to adopt new technological methods because of the limitation of the new media at that time but he chose a new strategy, a psychological method. In our days most of the newspapers and magazines adopt new methods such as websites or blogs which are meant to transform local publications into interactive online magazines with global audience. These methods can be considered more technological ones than psychological (although one may argue that the reason for adopting them has a psychological background) comparing to the one Kilgore adopted. ...read more.

Basic technological skills concerning new media became lately part of the development process for many children in the modern society. Most of the teenagers and young adults are digital natives because they grow up with television, internet and all kinds of forms of new media. So,it is no longer remarkable to have basic skills in new media technology for a person who desires to be part of media industry. To succeed in a flood media industry with a highly competitive environment, it is a must to have a good understanding of new technology in television, radio and publishing area but as well to be aware of all traditional media techniques: "The new breed of new media needs to be a good communication designer, as well as a good digital designer; not only a talented artist with a brush, but also a talented artist with a computer table, keyboard, mouse or any newly emerging digital device and programmer's brain" (New Media, An Approach Document, 2004). The new media is still an emergent sector of today's media, in process of expanding and so, the methods that it requires are as well developing in order to keep up with the requirements. So, because the landscape of media industry is in a continuous progress, new technologies are being developed and consumer's needs are changing rapidly, new methods must be applied in all sectors regarding media. ...read more.