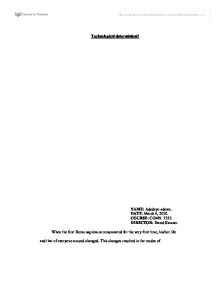 Technological determinism? NAME: Adedayo adewa. DATE: March 6, 2010. COURSE: COMN. 2312. DIRECTOR: David Skinner. When the first h**o sapiens communicated for the very first time, his/her life and that of everyone around changed. This changes resulted in the modes of communication - as time and space progressed - and the development of new medium, which helped humans cross time and space in terms of communicating. Each new communication technology created, revolutionized our world and our way of reasoning. When oral words were embedded on stone, clay, parchment, papyrus and paper1, humans were to record the past, and present thus passing or storing information from one generation to the next in its exact intended way, rather than relying on human unpredictable re-collective memory in the oral era. Finally we entered into an age of electronic means of communication, an age where information could travel across time and space in a short period. The development of the different modes of Communication and their respective media definitely resulted in the shaping of social activities both in an ameliorating and exacerbating way. However in this essay I will try to not to oppose the above technological deterministic notion rather I will introduce a new theory or notion - social determinism theory - that works hand-in-hand with the above theory. ...read more.

"The way books were produced changed as dramatically as computers today changed productivity in the office environment."7 In all the Printing Press era brought out the consequences of writing on a mass scale. Printing as an outlet of written communication paved the way for what will become the most innovative development in history. The electronic means of communication have greatly revolutionized human communication ability, with the introduction of television, telegraph, et Cetera which are able to cross time and space unlike other modes or mediums that only crossed time; it also changed or changes our way conception of both time and space.8 For instance a person living in Nigeria sending a massage to someone in Germany would have a delay time, however the development of the telegraph lessen that time. The electronic era saw the combination of oral and writing communication into technological mediums that reached and involves all member of the different society - the Internet -, thus resulting in the move from linear thought to a more reinforces sense of individuality and privacy. Furthermore, to clearly illustrate my point of a technical and social driving force I will propose case studies on both sides of the spectrum. Technological determinism is reinforced by Marshall McLuhan's idea that the medium is the message; the technology used to express an idea, is the message that it intends on sending to the audience. ...read more.

civilization involved in the shift from absolute monarchy to a more democratic organization coincides with a shift in emphasis on stone to an emphasis on papyrus."16 Meaning social activities and technological development coherently configure the society as a whole. In conclusion, every country for example Canada, experiences technological determinism from the United States, and this changes every aspect of our society; our media, market, Et cetera. However without our social desire the notion of technological determinism from the US would not be possible. Based on my non-biased analysis, it is only wise to say that the changes in any society results due to its social activities and the development of technology. Therefore a socio-technical approach or system; a system composed of technical and social subsystems best describes any society. It is an approach to complex organization that recognizes the interaction between people and technology. It can also be seen as the interaction between society's complex infrastructures and human behavior. In this sense, society itself, and most of its substructures, are complex socio-technical systems. In the oral mode of communication the medium - language can be considered a technology - embedded political, economical, Et Cetera, characteristics. Paper, stone, clay, Et Cetera also carry with them social phenomenon in the written mode of communication, now in the electronic era every individuals embed in every medium his or her own political, religious, Et Cetera, activities either to decode or encode. ...read more.