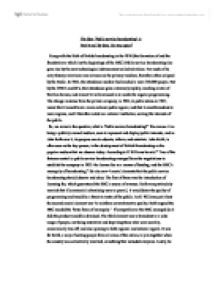 The Idea 'Public service broadcasting' is past its sell by date. Do you agree?

The Idea 'Public service broadcasting' is Past its sell by date. Do you agree? Along with the Birth of British broadcasting in the 1926 (the formation of and the foundation to which lay the beginnings of the BBC) Public service broadcasting also gave rise by the new technological advancement called television. For much of its early history, television was not seen as the primary medium, therefore often eclipsed by the Radio. In 1922, the attendance number had reached a mere 149,000 people. But by the 1930's and 40's, that attendance grew extremely rapidly, reaching a total of 9million homes, and almost 34 million tuned in to watch the regular programming. The change in status from the private company, in 1922, to public status in 1927, meant that it would have a more national public appeal, and that it could broadcast to more regions, and it therefore acted as a national institution, serving the interests of the public. So, we come to the question, what is 'Public service broadcasting?' We can see it as being a publicly owned medium, seen to represent and display public interests, and as John Reith saw it, its purpose was to educate, inform, and entertain. John Reith, is often seen as the key person, in the development of British Broadcasting as the popular medium that we observe today. ...read more.

The second pillar that came under scrutiny was Reith's idea that the BBC needed to maintain its monopoly status in order to 'reinforce commitment to quality.' The BBC never really enjoyed their monopoly status for too long, as the Birth of commercialised television gave rise to competition. What he meant about 'commitment to quality' was to reinforce the quality of programming, through his three main themes. This was to educate, inform, and entertain. With the arrival of commercialised TV, he saw as favouring entertainment, and that quality of broadcasting, where education, and informative programmes may have existed, slowly vanishing from our TV sets. And in this sense, he was right. The arrival of satellite and cable channels allowed for the proliferation of channels, and entertainment as a result is ruling our airways. But, Reith's idea about 'commitment to quality' is still with us, just not m the format that he set out so many years ago. Mixed programming on a single channel does not occur that often. With the many different channels now available to us, programming quality has been 'devalued.' Jean Seaton in her book 'power without responsibility, the press and broadcasting in Britain' wrote, "The victims of media concentration are variety, creativity, and quality, while the proliferation of broadcasting channels in the hands of a small band of operators, 'liberated' by government policy from the obligations of public service variety, is likely to make matters worse." ...read more.

Radically changing this approach, was the Annan report in which 'broadcasting should cater for the full range of groups and interests in society, rather than seek to offer moral leadership.' So public service broadcasting is no longer controlled, but much more liberal, and very pluralist in nature. Much of it is catered for public interest, rather then showing a mixed range of programming. 'Consumer sovereignty' as John Fiske put it, is very much prevalent in todays viewing. Culturally valued programming is still maintained through the BBC (although it has evolved to a more entertainment based scheduling of programming), and channel 4 is very rich in cultural terms. We have to remember that the audience is no longer passive, as it once may have been. It is very much active, and we are control of what we watch. Television is also being replaced with other forms of media, such as the Internet. Licenses fee's remain a governing aspect of what 'public service broadcasting' used to contain, but in contemporary context, we can see it as being consumer lead and advertising driven, form of media. Since the Days of Reith, much has changed, and the meaning of what it is to a be a 'public broadcasting service' is adapting and varying all the time, to suit the needs, wants and desires of the public as a whole. ...read more.