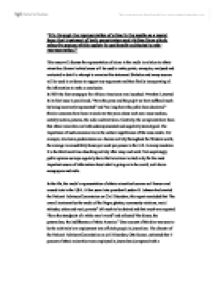 This essay will discuss the representation of crime in the media in relation to ethnic minorities. Several related cases will be used to make points, examples, analysed and evaluated in detail to attempt to examine this statement.

"It is through the representation of crime in the media as a moral issue that treatment of both perpetrators and victims from ethnic minority groups within society is continually subjected to mis-representation." This essay will discuss the representation of crime in the media in relation to ethnic minorities. Several related cases will be used to make points, examples, analysed and evaluated in detail to attempt to examine this statement. Statistics and many sources will be used in evidence to support my arguments and then finally incorporating all the information to make a conclusion. In 1827 the first newspaper for African Americans was launched: Freedom's journal. In its first issue it proclaimed, "From the press and the pulpit we have suffered much by being incorrectly represented" and "too long have the public been deceived." Similar concerns have been voiced over the years about each new mass medium, notably motion pictures, the radio and television. Centrally, the complaints have been that ethnic minorities are both underrepresented and negatively stereotyped. The importance of such concerns lies in the cultural significance of the mass media. For example, television predominates as a human activity throughout the Western world; the average is around thirty hours per week per person in the U.K. ...read more.

Women who wear the hijab (veil) do so to deflect the male s****l gaze and to represent their modesty and commitment to their faith; it is both a sign of respect and a form of protection. At the same time, the hijab can arouse aggression, harassment and hostility from those in the non-Muslim community. Particularly since 9/11, many Muslim women have been targets of hate crime by the Islamophobic who express their prejudices on the victim. Violence can be construed in many different ways, it is the narrative of the violence, in films and television it is completely different to the reality in say documentaries or shows like Cops, but it is the individual who will interpret this violence by seeing their own position in comparison to the narrative characters. The footage of Rodney King being beaten by police officers, this case can be interpreted differently by different races; black people may see it as a r****t attack, whereas the white audiences may not see him as the victim, but the perpetrator who brought the beating upon himself by doing criminal activities. "It is well established that people from ethnic minority groups are more at risk of being the victim of crime than white people." ...read more.

In conclusion, it is well established that public knowledge of crime and justice is largely derived from the media and that the media play a key role in the public's perception of criminals, victims and those who work within the criminal justice system. And it is widely accepted that the general public have a distorted and exaggerated view of the extent and the nature of crime, so the question 'why' arises, to put the general argument for this question simplistically is fear, fear being generated by the media to be cautious of the criminal activities taking place and it is also a tool to attract a greater audience. There has been many cases were minorities are misrepresented as perpetrators, however in Britain we have been advantaged to the arguably unbiased BBC, where fair media coverage is a main aspect. Though there have been concerns that the media cover too much of minorities as perpetrators and too less of them as victims, recently there have been more coverage of minorities as victims, for example, the kidnapping of a boy whilst he was on holiday in Pakistan, the general public as well as the media are continuously learning from the past faults and the fact that Britain being one of the most ethnically diverse countries in the world, the past errors of misrepresentation in the media may soon be a part of history. ...read more.