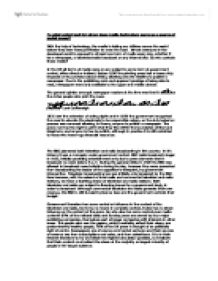 To what extent and for whom does media technology serve as a source of social power?

To what extent and for whom does media technology serve as a source of social power? With the help of technology, the media is taking our children across the world before they even have permission to cross the road. Almost everyone in the developed world is exposed to at least one form of media every day, whether it be a newspaper, a television/radio broadcast or any internet site. So who controls these media? In the UK all forms of media were or are subject to some form of government control, either direct or indirect. Before 1836 the printing press had a heavy duty imposed on its purchase (about �200), allowing only the wealthy to publish a newspaper. Due to the publishing costs and apparent prestige of being able to read, newspapers were only available to the upper and middle classes. The general opinion amongst newspaper readers at the time was that it should be the richer people who print the news. "Persons exercising the power of the free press should be men of power and property" Lord Castlereagh. 1831 saw the extension of voting rights and in 1836 the government recognised the need to educate the electorate to be responsible voters, so the duty levied on presses was removed allowing, in theory, anyone to publish a newspaper. ...read more.

With the cuts in union power and the current state of the employment market, people cannot risk losing their job over ideology, at present people are too easy to replace. So the whom to which the question refers is not just one person or organisation, but an array of influences, some more profound than others, the government, media barons, advertisers, market forces and of course the consumer. If social power is the ability to influence the actions and opinions of others, despite resistance, how far does media technology achieve this? In 1938 one radio broadcast frightened or disturbed over one million listeners. Orson Welle's radio play of H.G. Wells' 'War of the Worlds' caused such widespread panic that it precipitated a change in the laws governing broadcasting in the United States of America to prevent it happening again. It is thought that about one sixth of the audience of that programme were influenced by the broadcast, most of these having tuned in late and missed the introduction. It is thought to be the realism of the broadcast (much of it broadcast as news bulletins, with expert opinion from politicians and military leaders) and the nation's situation at the time, i.e. ...read more.

In conclusion, the degree of social power wielded by media technology is dependent on many factors, the audience itself being chief amongst these. The influence it has over its' audience depends on both their social background and experience; how the audience uses the media; and of course the content of the media itself. The same program or report will have different effects on some than on others. The different types of media will also have varying degrees of effectiveness. Some individuals or groups have a greater degree of control over media technology than others. This will inevitably influence the effectiveness of media technology as a tool of social power: A man who owns an on-line journal will have much less social influence than a man who owns a television network. It is impossible to measure the effects of media technology, but it would be fair to say that the media will at sometimes affect our actions and opinions. It would also be fair to say that some are more vulnerable to the influence of media than others. (Frank Webster) Theories of the information society. 1995. (Robin Roy, Nigel Cross) Technology and society. 1975 (Stanley A. Hetzler) Technological growth and social change : achieving modernization. 1969. (Esther Dyson) Release 2.1: A design for living in the digital age. 1995 FSS 122 essay Paul Shepherd FC137640 BABJ1 Word count = 1,574 ...read more.