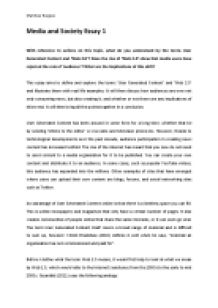 User Generated Content and Web 2.0. Does the rise of Web 2.0 show that media users have rejected the role of audience? What are the implications of this shift?

﻿Matthew Burgess Media and Society Essay 1 With reference to writers on this topic, what do you understand by the terms User Generated Content and ?Web 2.0?? Does the rise of ?Web 2.0? show that media users have rejected the role of ?audience?? What are the implications of this shift? This essay aims to define and explore the terms ?User Generated Content? and ?Web 2.0? and illustrate them with real life examples. It will then discuss how audiences are now not only consuming news, but also creating it, and whether or not there are any implications of this trend. It will then bring all the points together in a conclusion. User Generated Content has been around in some form for a long time, whether that be by sending ?letters to the editor? or via radio and television phone-ins. However, thanks to technological developments over the past decade, audience participation in creating news content has increased tenfold. ...read more.

The arrival of Web 2.0 turned people from ?audience? into ?users?. Rather than the internet being just a ?broadcast channel? (Guantlett, 2011), It became possible to interact with others and contribute towards content online. Sites such as YouTube, EBay, Facebook, Twitter and Wikipedia were only made possible by the arrival of Web 2.0 as they require users to create content instead of just being an audience to someone else?s. Guantlett (2011) also distinguishes between a ?Sit back and be told culture? which progressed to a ?making and doing? culture. Before this progression, you had very little power to challenge what it was you read. Now with increased user participation online and greater interactivity, ordinary people can question what they have read and maybe even create an opposing argument. The social networking site Twitter has become a prolific tool in gathering support towards a cause, and sometimes to start campaigns against something. Branston and Stafford (2010) say: ?News forms have always had the power to circulate hostile images of groups and individuals. ...read more.

User Generated Content can be posted online as soon as an event has happened. This immediacy means that more people have been getting their news online, instead of waiting until the next day to buy a newspaper. This has caused a decline in the sales of newspapers. News organisations need to find new ways to adapt to the current environment as the rise of Web 2.0 has put considerable strain on them. To go back to the original question, I believe media users have partly rejected the role of audience thanks to the raise of Web 2.0. Some users seem to want to take a part in telling the news now, and sharing their opinion or angle on a story. This does not include everyone though as there are those people who will remain an audience to the news. There are benefits and limitations to this change in the way we consume media as explained above. I can?t see news organisation completely dying out however as we will still always rely on them for accurate impartial information, which is not something you will always find from ordinary users creating their own content. ...read more.