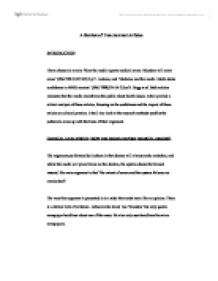 A Review of Two Journal Articles.

A Review of Two Journal Articles INTRODUCTION I have chosen to review 'How the media reports medical errors: Blunders will never cease' (BMJ 2001;322:562) by T. Jackson, and 'Medicine and the media: Media dents confidence in MMR vaccine' (BMJ 1998;316:561) by N. Begg et al. Both articles insinuate that the media misinforms the public about health issues. I shall provide a critical analysis of these articles, focusing on the usefulness and the impact of these articles on clinical practice. I shall also look at the research methods used by the authors to come up with the basis of their argument. CRITICAL ANALYSIS OF 'HOW THE MEDIA REPORT MEDICAL ERRORS' The argument put forward by Jackson is that doctors will always make mistakes, and whilst the media will place blame on the doctors, the system should be blamed instead. His main argument is that "the extent of errors and the system failures are overlooked". The way this argument is presented is in a style that reads more like an opinion. ...read more.

The author is merely stating his opinion and there is no in-depth analysis. I doubt it would have an impact on clinical practice, or on the way the media reports medical errors. However, he does provide an alternative, acceptable, method of reporting medical errors in saying "there is a need for a system based rather than a blame based approach". CRITICAL ANALYSIS OF 'MEDICINE AND THE MEDIA' The argument put forward by Begg et al is that the negative reporting by the media has damaged the MMR vaccination programme. This article is a stark contrast to the previous one. The article by Begg et al is not written as if an opinion is being stated; points are made and backed up with evidence. For example, Begg et al have used an article from the Communicable Disease Report to come up with the point that "coverage of the first dose of MMR vaccine in the UK fell last quarter after adverse publicity in the press". ...read more.

This article is useful in that it highlights why the media adversely reporting MMR vaccine is a problem, and it brings together all the data on the affect this reporting has had on MMR vaccine coverage, and on peoples' perception of MMR vaccine. However, the article could have improved on its usefulness as it states "it is important to restore public confidence in the vaccine" but it doesn't actually go into a discussion about how this could be done. This article probably did have an impact on health professionals when it came out because the figures showed exactly how much of an affect the media had on MMR vaccine coverage, and because of the persuasive language used. CONCLUSION To conclude, the article 'medicine and the media' was more useful, had more of impact and was written better than 'how the media report medical errors'. Begg et al used a wider range of sources in their research and backed up points with evidence from their research, whereas Jackson seemed to be merely stating an opinion without much in the way of evidence. ...read more.