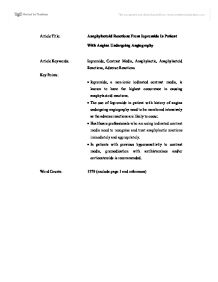 Article Title: Anaphylactoid Reactions From Iopromide In Patient With Angina Undergoing Angiography Article Keywords: Iopromide, Contrast Media, Anaphylactic, Anaphylactoid Reactions, Adverse Reactions Key Points: * Iopromide, a non-ionic iodinated contrast media, is known to have the highest occurrence in causing anaphylactoid reactions. * The use of Iopromide in patient with history of angina undergoing angiography need to be monitored intensively as the adverse reactions are likely to occur. * Healthcare professionals who are using iodinated contrast media need to recognise and treat anaphylactic reactions immediately and appropriately. * In patients with previous hypersensitivity to contrast media, premedication with antihistamines and/or corticosteroids is recommended. Word Counts: 1379 (exclude page 1 and references) BRIEF REPORT Anaphylactoid Reactions From Iopromide In Patient With Angina Undergoing Angiography SUMMARY/ABSTRACT A 55yr old patient with a history of angina is being assessed for a coronary bypass. Undergoing an angiography, on infusion of non-ionic iodinated radio contrast media (Iopromide), incidence is occurred. Clinical manifestations are consistent with anaphylactoid reactions. The patient becomes confused, appears flushed and also develops palpitations, angioedema, hypotension and bronchoconstriction. Following treatment with sympathomimetics and anti-histamines, the patient recovers and is returned to the ward. Non-ionic iodinated radio contrast media has commonly caused adverse reactions. Iopromide-induced anaphylactoid reactions has the highest occurrence among the same drug class. ...read more.

Following treatment with sympathomimetics and anti-histamines, the patient recovers and is returned to the ward. DISCUSSION Delayed reactions to iodinated contrast media are most likely caused by immune reactions to this drug. Using in vitro and ex vivo test, a study demonstrates a T cell-mediated mechanism to the iodinate contrast media,4 whilst the aetiology of immediate reactions still remains unclear. The term used whether "anaphylactoid reactions" or "anaphylactic" for immediate reactions explains the mechanism of physiology response, specifically related to immunology reaction. Anaphylactic involves Ig-E while anaphylactoid reaction is not mediated by Ig-E but express the similar clinical manifestation. 5 The mechanism of parasympathetic activity on smooth muscle induced by the release of endothelium-derived relaxing factor, which is decreasing rate of the sinoatrial node and delaying conductivity of the atrioventricular nodal conduction, and peripheral vasodilatation. This will cause hypotension and bradycardia, with the symptoms of palpitations. 5 All of these conditions match with patient's symptoms. The pharmacological adverse reactions of iodinated contrast media are similar to the mechanism of histamine release of allergy. Histamine mediates its effects through activation of histamine 1 (H1) and histamine 2 (H2) receptors. Both H1 receptors and H2 receptors mediate glandular hyper secretion. smooth muscle contraction and increase mucosal secretions, which can lead to anaphylactoid reactions.6 This explains the patient's symptoms of developing angioedema. ...read more.

Oral double dose of methyl prednisolone is suggested to prevent a potentially major reaction of iodinated contrast media.13 For antihistamines, since the mechanism of reaction is still being in debate whether or not mediated by Ig-E, limited evidence shows they are beneficial. However, in some patients with a history of allergies, pre-treatment with corticosteroid and antihistamines is presumably helpful. Limited evidence is available about this regime. 14 A further study about the structure activity relationship of this drug class need to be proceed to invent the high quality imaging radio medicine with lower adverse reactions. Alternative (Non-Drug Induced) Explanation * As the patient has a history of angina, there is a probability that the patient might have recurrent cardiovascular problem, such as: angina attack, atrial fibrillation or myocardial infarct. * There is also a probability that the patient has certain severe allergy that is induced by certain food intake or insect bite before the angiography performance. * Since the clinical manifestations of anaphylaxis/anaphylactoid reactions is similar to respiratory and pulmonary complications. It is crucial to examine whether or not it is an asthma attack of the patient that already suffer from severe asthmatic syndrome before the procedure take place. ACKNOWLEGDGEMENT The author thanks Dr. Andrzej Kostrzewski and Dr. Russell Foulsham for their guidance with preparing the content of this article; and Mrs. Jane Parry for her help with improving the language used. ...read more.