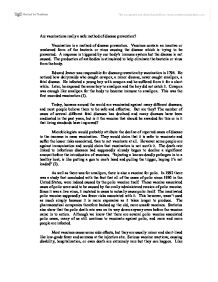 Are vaccinations really a safe method of disease prevention?

Are vaccinations really a safe method of disease prevention? Vaccination is a method of disease prevention. Vaccines contain an inactive or weakened form of the bacteria or virus causing the disease which is trying to be prevented. A response is triggered by our body's immune system but the disease is not caused. The production of antibodies is stimulated to help eliminate the bacteria or virus from the body. Edward Jenner was responsible for disease prevention by vaccination in 1796. He noticed how dairymaids who caught cowpox, a minor disease, never caught smallpox, a fatal disease. He infected a young boy with cowpox and he suffered from it for a short while. Later, he exposed the same boy to smallpox and the boy did not catch it. Cowpox was enough like smallpox for the body to become immune to smallpox. This was the first recorded vaccination (1). Today, humans around the world are vaccinated against many different diseases, and most people believe them to be safe and effective. ...read more.

In 1992 there was a study that concluded with the fact that all of the cases of polio since 1980 in the United States, were indeed caused by the polio vaccine itself. These vaccine associated cases of polio were said to be caused by the orally administered version of polio vaccine. Since it was a live virus, it mutated in cases to actually cause polio itself. The inactivated polio vaccine supposedly has fewer risks associated with it. This however, wasn't used as much simply because it is more expensive as it takes longer to produce. The pharmaceutical companies therefore backed up the old, more unsafe vaccines. Statistics also show that the polio death rate was on its way down anyway even before the vaccine came in to action. Although we know that there are several polio vaccine associated polio cases, many of us still continue to vaccinate against polio, and more and more people are infected. ...read more.

People most at risk of hepatitis B are IV drug users, prostitutes, practicing homosexuals, dialysis patients and health care workers exposed to human blood. Which of these categories justify immunizing 4 million children a year with a vaccine that carries known risks which are often more dangerous than the disease itself? (4) My opinion to the question "Are vaccinations really a safe method of disease prevention?" is unsure. I have been vaccinated against a number of diseases and I have not experienced any suffering from it. I find it disturbing to know that many people's lives have been affected by the use of unsafe vaccines. But who is to say where we would be today in life if it wasn't for Edward Jenner and the discovery of vaccines? If vaccines are effective, then why do figures show an increase in the rate of occurrence of many diseases after their vaccinations began? But on the other hand, if vaccines are ineffective, then why has smallpox completely disappeared since the development of vaccines? ...read more.