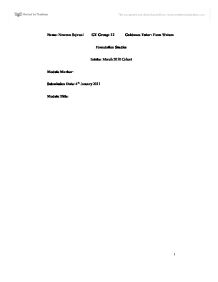 Clinical care case study. Mrs. Burton was left with a mixture of emotion mostly feeling of dissatisfaction after her appointment, especially as she had been so nervous and apprehensive about seeing the doctor in the first place. Mrs. Burton had suspected

Name: Nazrean Sajawal GT Group: 12 Guidance Tutor: Fiona Watson Foundation Studies Intake: March 2010 Cohort Module Marker: Submission Date: 4th January 2011 Module Title: This assignment will be identifying a service user from my clinical placement as well as discussing an episode of care that was received from a service user's perspective. This occurred during one of the days that the student nurse worked at the clinical placement. The term for person centre care is mentioned frequently in the older people literature, particularly in dementia care. Brooker (2004, p.219) proposes that 'in person-centred care the relationships between all the people in the care environment should be nurtured'. Similarly, McCormack (2004) proposes that relationships, environmental conditions and individual values epitomise person-centred gerontological nursing. The name of patient and the clinical placement will not be named as it preaches one of the codes of conduct from the Nursing and Midwifery Council, which is confidentiality (NMC, 2008). Throughout the assignment the service user will be called Mrs. Burton. The nurse patient relationship appears to be good between the student nurse and Mrs. Burton. Therefore, it was consider relevant to interview Mrs. Burton who had a positive and negative experience on care that they had received. There will also be relevant literature to underpin the care that Mrs. ...read more.

Her granddaughter is a trainee nurse who has had little knowledge and understanding of the term depression in which she had learned at university. Mrs Burton wanted to know more about the medication that the GP had prescribed, as she did not know what benefits of taking the medication could do for her health and the side effects to this. She was quite happy that her family such as her granddaughter could assist her needs. NICE Guideline (2009) and McCormack's (2004) have argued that families and carers can play an important part in supporting a person with depression, particularly if their symptoms are severe. This can be helping them with daily tasks or activities that need to be doing. Looking at the experience that Mrs. Burton was going through the key issue of this episode of care, was communication as well as not being to have any option or choices on the care she should be receiving such as cognitive behaviour therapy or group session. However Mrs. Burton felt that there was no explanation given by the GP on how he came to the conclusion that she was suffering with depression. Surely the GP has to be conducting an initial assessment in order to diagnose her for depression. Stott (1996) highlights that the GP need to carry out the initial assessment in order for client and the GP can work together in order to recognise the clients functional deficits and also his/her areas of ability and Wilkinson (2002) ...read more.