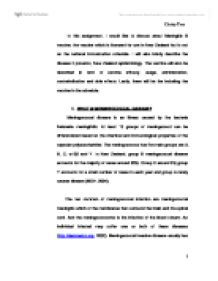 In this assignment, I would like to discuss about Meningitis B vaccine, the vaccine which is licensed for use in New Zealand but is not on the national immunization schedule. I will also briefly describe the disease it prevents, New Zealand epidemiology. The vaccine will also be described in term of vaccine efficacy, usage, administration, contraindication and side effects. Lastly, there will be the including the vaccine in the schedule. 1. WHAT IS MENINGOCOCCAL DISEASE? Meningococcal disease is an illness caused by the bacteria Neisseria meningitidis. At least 13 groups of meningococci can be differentiated based on the chemical and immunological properties of the capsular polysaccharides. The meningococcus has five main groups are A, B, C, w135 and Y. In New Zealand, group B meningococcal disease accounts for the majority of cases around 93%. Group C around 6% group Y accounts for a small number of cases in each year and group A rarely causes disease (MOH, 2004). The two common of meningococcal infection are meningococcal meningitis which of the membranes that surround the brain and the spinal cord. And the meningococcemia is the infection of the blood stream. ...read more.

wall of the New Zealand strain of meningococci. MeNZB vaccine contains: aluminum hydroxide as the adjuvant, histadine buffer to stabilize the pH of the vaccine and normal saline (Peltola, 1998). 6. PREVENTION The epidemic strain of meningococcal disease that the targeted by MeNZB vaccine continues to causes the majority of meningococcal disease cases. The introduction of the MeNZB vaccine will significantly impact on the number of notified cases of epidemic train group B meningococcal disease during 2005 with the likely continuance in the background rates for other serogroups and sub-strains of serogroup B meningococcal disease (MOH, 2004). However, the Meningococcal B Immunization Program has commenced in the highest risk areas of New Zealand and will continue to be rolled out during 2005 throughout the rest of the country (MOH, 2004). 7. CLINICAL EFFICACY MeNZB vaccine may not protect every person who receives the three doses nut it is expected that most people will be protected. While the exact period is unknown, protection is expected to last for a number of years. Data from trials using a vaccination schedule of 3 doses MeNZB given with an interval of 6 weeks demonstrate that 55% of infants (6 weeks), 74% older infants( 6 weeks), 75% toddlers, 76% children, and 93% adults developed a 4-fold rise(compared with pre-vaccination values) ...read more.

Most infants had normal body temperature by the second day after vaccination. 11. DISCUSSION A vaccination schedule of three (four for infants) doses MeNZB given with an interval of 6 weeks between doses induces a humoral immune response against the New Zealand strain. Infants are the group at highest risk of the epidemic strain of group B meningococcal disease. It is therefore recommended that the first three MeNZB vaccine doses be given concurrently with other childhood vaccines: * Dose 1 at six weeks of age * Dose 2 at three months of age (13 weeks of age) * Dose 3 at five months of age (at least 21 weeks of age) And then: Dose 4 at 10 months of age (at least 43 weeks) These dose intervals are to ensure the MeNZB vaccine stimulates the optimum immune response as recorded in the clinical trials, while offering protection as early as possible. REFFERENCES http://www.moh. Meningococcal B disease. (2004). http://www. everybody.co.nz/docsip/ meningitis.html. (2004) Meningitis and meningococcal disease. MOH. (2002). Immunization handbook. Wellington: New Zealand. Peltola, H. (1998). Meningococcal vaccines. Drugs. 55:347-366. Sexton, K., Lennon, D., Oster, P., Crengle, S., Martin, D., Mulholland, K., Percival, T., Reid, S., Stewart, J. & O'Hallahan, J. (2004).The New Zealand Meningococcal Vaccine Strategy: A tailormade vaccine to combat a devastating epidemic. The New Zealand Medical Journal, 1200: 1- 9. ?? ?? ?? ?? Christy Tran 1 ...read more.