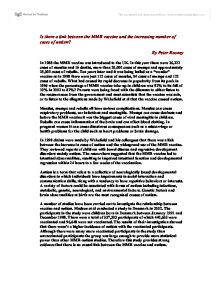 Is there a link between the MMR vaccine and the increasing number of cases of autism?

Is there a link between the MMR vaccine and the increasing number of cases of autism? By Peter Rooney In 1988 the MMR vaccine was introduced to the UK. In this year there were 26,222 cases of measles and 16 deaths, more than 20,000 cases of mumps and approximately 25,000 cases of rubella. Ten years later and it was being hailed as a "wonder" vaccine as in 1998 there were just 112 cases of measles, 94 cases of mumps and 122 cases of rubella. What had caused its rapid decrease in popularity from its peak in 1996 when the percentage of MMR vaccine take-up in children was 92% to its fall of 10% in 2002 to 82%? Parents were being faced with the dilemma to either listen to the reassurances from the government and most scientists that the vaccine was safe, or to listen to the allegations made by Wakefield et al that the vaccine caused autism. Measles, mumps and rubella all have serious complications. Measles can cause respiratory problems, ear infections and meningitis. Mumps can cause deafness and before the MMR vaccine it was the biggest cause of viral meningitis in children. ...read more.

Madsen et al conducted a study in Denmark in 2002. The participants in the study were children born in Denmark between January 1991 and December 1998. There were a total of 537,303 participants of which 440,655 were vaccinated and 96,648 were not vaccinated. The results of their investigation showed that there wasn't a higher incidence of autism with the vaccinated participants. Although there were many more vaccinated participants in the study than unvaccinated participants the group was large enough to provide more statistical power than other MMR-autism studies. Therefore this study provides strong evidence that there is no causal link between the MMR vaccine and autism. The MMR-autism relationship theory is based on the idea that intestinal problems e.g. Crohn's disease, are the result of a viral infection and can contribute to the development of autism. The MMR and autism debate was at its peak in 1998 when Wakefield published his study in Lancet. Their hypothesis claimed that the vaccine led to intestinal abnormalities, resulting in impaired intestinal function and developmental regression within 24 hours to a few weeks of the vaccine. ...read more.

a separate vaccine for measles, mumps and rubella. There is no scientific research or data to indicate that there is any benefit in splitting the vaccine. Although three separate doses would cause more discomfort due to the additional injections and would also leave the children exposed to potentially life threatening diseases. If the rubella vaccine was separated and delayed, millions of children would be susceptible to rubella for an additional time period than necessary. This means that if a pregnant woman were to contract "wild" rubella from a unvaccinated child, the child she was carrying could develop autism. As the "wild" rubella virus is one of the few known causes of autism. Therefore, ironically the MMR vaccine actually helps to prevent cases of autism. The MMR-autism debate is a very emotive topic and we must be careful whilst reviewing it not to get too caught up with all the media attention that surrounds the argument. We must acknowledge that there never was a scientific basis for asserting a link between MMR and autism. Furthermore, epidemiological studies have consistently failed to find any correlation between the MMR vaccine and the rise in autism diagnosis. The MMR scare was based on superstition and not science. ...read more.