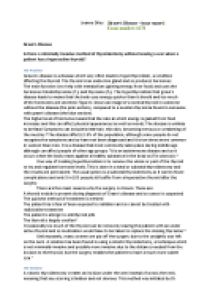 Is there a minimally invasive method of thyroidectomy without leaving a scar when a patient has a hyperactive thyroid?

﻿Joanne Diles [Grave?s Disease ? Issue report] Exam number: 6178 Grave?s Disease Is there a minimally invasive method of thyroidectomy without leaving a scar when a patient has a hyperactive thyroid? The Problem Graves?s disease is a disease which very often leads to hyperthyroidism, a condition affecting the thyroid. The thyroid is an endocrine gland and so produces hormones. The main function is to help with metabolism (gaining energy from food) and uses the hormones triiodothyronine (T3) and thyroxine (T4). The hyperthyroidism that grave?s disease leads to means that the body uses energy quicker than it should and too much of the hormones are secreted. Figure 1 shows an image of a normal thyroid in someone without the disease (the pink section), compared to a swollen thyroid as found in someone with grave?s disease (the blue section). The higher level of hormone means that the rate at which energy is gained from food increases and this can affect physical appearances as well as moods. The disease is unlikely to be fatal. Symptoms can include brittle hair, thin skin, becoming nervous or weakening of the muscles.1 The disease affects 2-3% of the population, although some people do not recognise the symptoms and so have not been diagnosed and it is ten times more common in women than men. ...read more.

The participants in the study needed lymph nodes (the location of the cancer) removed. The patients were assessed on factors such as hospital stay, complications, operation length and the number of lymph nodes removed. The results of this study showed that, although the average operating time for the robotic surgery was significantly longer than the open surgery with robotic surgery taking an average of 4 hours and 37 minutes and open surgery taking an average of 3 hours and 38 minutes. The average number of lymph nodes removed was 39.4 for open compared to 37.3 for robotic. After the operation, the average stay in hospital for the patients who underwent the robotic surgery was just 6 days whereas the stay for those who underwent the open surgery was 8 days. After the surgery, 72.5% of the open surgery group suffered complications whereas 72.2% of the robotic group suffered complications, showing that there is very little difference between the two methods. Neither of the surgery options gave any indication of the cancer returning. It was concluded that the robotic thyroidectomy is a safe procedure and so is an acceptable alternative to open neck surgery. It was also concluded that a large advantage of the robotic thyroidectomy was the cosmetic results of the scar being under the arm rather than across the neck.13 Figure shows the post-operation pain score on a scale of 1 to 10, with the red line representing the robotic surgery and the blue line representing the open surgery. ...read more.

Within six months of taking the medicines, 50% of patients who use the ?block and replace? method get better whereas it takes 18 ? 24 months for this to happen using the ?titration? method. Like any drugs there are side effects. These include rashes, headaches, sore throat or mouth ulcers.11 Radioactive iodine treatment (RAI) is a type of radiotherapy which implants radioactive iodine into the thyroid. This then builds up within the thyroid and causes it to decrease in size which then decreases the amount of thyroxine made. This can be done either in a drink or in a pill but neither of these methods contain harmful amounts of radioactivity. There are limitations in that the treatment is unsuitable during pregnancy and if the patient has eye problems.5 RAI is often given in doses which are too large; leading to hypothyroidism due to the difficulty in controlling how much is needed. There has recently been work to try and make this a more efficient cure although it is challenging and currently, 20% of all patients suffer from hypothyroidism in the first year after treatment and another 3-5% more every year following. This shows it to have a low total success rate. 6 In conclusion, you can see that this is not a minimally invasive procedure due to the distance needed to reach the thyroid from under the arm, although it does not leave a scar and so is a suitable method to be used on patients who are worried about the cosmetic look of the scarring. ...read more.