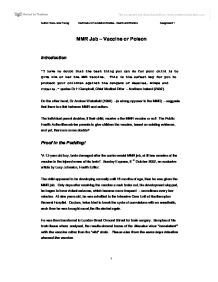 MMR Jab - Vaccine or Poison Introduction "I have no doubt that the best thing you can do for your child is to give him or her the MMR vaccine. This is the safest way for you to protect your children against the dangers of measles, mumps and rubella." quotes Dr H Campbell, Chief Medical Offer - Northern Ireland (2002). On the other hand, Dr Andrew Wakefield (1998) -(a strong opposer to the MMR) - suggests that there is a link between MMR and autism. The individual parent decides, if their child, receives the MMR vaccine or not! The Public Health Authorities advise parents to give children the vaccine, based on existing evidence, and yet, there are some doubts? Proof in the Pudding! "A 13-year old boy, brain damaged after the controversial MMR jab, still has remains of the vaccine in the injured areas of his brain". ...read more.

Experts such as Robert Sawyer, Chief Executive of the Charity Visceral, which funds the research by MMR opponent Dr Andrew Wakefield said "The world must pay immediate attention to this evidence, especially when the Government is not taking the issue seriously". Who does not use the MMR? Japan as a country, manufactures its own vaccine. A problem arose with the Mumps part of their vaccine shortly after its introduction in 1989. The Mumps part of the vaccine was found to be associated with aseptic mumps virus meningitis. The Japanese Ministry of Health and Welfare reported "As a result the authorities temporarily suspended their MMR vaccines in April 1993." A suitable Japanese manufactured MMR vaccine has not been re-introduced in Japan, but Ueda K (1995) responds saying that."Japan is hoping to have another MMR available soon". Balraj V, Miller E (1995) make clear "The mumps component in the MMR used in the US is NOT associated with aseptic mumps meningitis", suggesting that there are no familiarities between Japan's MMR vaccine and that of the UK. ...read more.

An Independent Inquiry Disassociates the MMR with Autism and Bowel Disease. On 23 March 1998, a meeting of 37 independent experts took place, to examine all the evidence that years of experience had produced. The experts from a range of disciplines met to, listen to, and review the published and unpublished research into any association between the measles, mumps and rubella vaccine and autism and bowel disease. At the meeting the Royal Free Hospital Inflammatory Bowel Disease Study Group (RFH-IBDSG) presented their findings. RFH-IBDSG (1998) clarified "There is no evidence to indicate any link between MMR vaccination and bowl disease or autism; and there is, therefore no reason for a change in the current MMR vaccination Policy". Following the fore mentioned meeting the Chief Medical Officer Northern Ireland wrote to all doctors, summarizing the research. Thus advising them, to advise parents, "This is the safest way for you to protect your children against the dangers of measles, mumps and rubella". It is estimated that in the UK alone (approax) 9 million MMR immunizations have been given, since its introduction in 1988. ...read more.