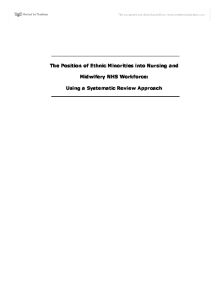 The Position of Ethnic Minorities into Nursing and Midwifery NHS Workforce: Using a Systematic Review Approach Acknowledgements I would like to express my gratitude to my husband, my children and my mother for supporting me towards the completion of my MSc programme. Table of Contents Acknowledgements 2 Table of Contents 3 Abstract 5 CHAPTER I: INTRODUCTION 7 1. Executive Summary 7 2. Introduction 10 3. Background Information and literature Review 12 4. Aim of proposed study 14 CHAPTER II: LITERATURE REVIEW 16 5. Review of Literature 16 5.1 Challenges and barriers that the profession brings it self 18 6. Statistics 22 CHAPTER III: METHODOLOGY 33 7. Study selection criteria and procedure 33 CHAPTER IV: RESULTS & DISCUSSION 44 8. Results 44 Diagram 1: Summary of studies included and excluded from the review. 44 8.2 Trends and characteristics of ethnic minority in nursing and midwifery NHS workforce 50 8.3 Possible Barriers 55 8.4 Interventions to attract ethnic minority groups into nursing & midwifery workforce 58 8.5 Recommendations from articles included in the review 62 8.6 Qualitative Critical Appraisal 63 9. Discussion 64 CHAPTER V: CONCLUSION 69 10. Conclusion 69 11. Recommendations 71 References: 73 Appendix 84 Abstract Gaining new knowledge, understanding a new research tool, observable evidence and the opportunity to investigate the position of ethnic minorities into nursing and midwifery National Health Services (NHS) workforce were the drivers for this dissertation topic. The focus of this dissertation topic is of a high priority to the NHS. The NHS is struggling to attract and retain staff in nursing and midwifery profession. There is evidence of low representation of ethnic minorities into this profession and a high disparity exists between the subgroups. There are particular low visibilities of all South Asian communities in this workforce. This dissertation uses the approaches of systematic review as a research tool to investigate the profile of ethnic minorities in particular South Asian groups into nursing and midwifery NHS workforce. ...read more.

by ethnic origin showed that the success ratio (obtained by dividing the minority ethnic success rate by the white British success rate) measure falls below 0.8. Commission for Racial Equality (CRE 2002a) suggested that this result should trigger an internal investigation. This survey was followed by other studies, which looked at the statistics on pre-registration nurse training (Gerrish et al 1996, Chevannes 2001, Iganski and Mason 2002) which showed similar patterns of inequality between the main ethnic groups. Asian ethnic groups are under-represented in applicants to nursing courses, and there is evidence that BME applicants have difficulty in securing course places (Online 2004). There are still very few BME nurses in top jobs and BME nurses are more likely to be asked to act up and not get paid for it than their white colleagues (Nursing Standard news 2005). In recognition of the inequalities that existed, the former UKCC (1991) (now the Nursing and Midwifery Council) proposed that recruitment and selection to programmes of nursing education should be reflective of the population for which they will be caring. The NHS and other employers must ensure that their employment practices and provision of career opportunities are non-discriminatory. This process should include facilitating career routes into nursing and other health sector employment, which are more accessible to the minority ethnic communities of inner city London and other urban areas. (Ball & Pike 2002, 2003; Buchan 2003; Duffin 2004) 8.2.4 Data on ethnic minority groups in nursing and midwifery professions The Labour Force Surveys for 1988 - 1990 estimated about 8% of all nursing & midwifery staff from minority ethnic groups. Nursing and Midwifery Admissions Services (NMAS) statistics show that, from the late 1990's there has been a steady increase in the recruitment of students from black Caribbean and Asian minority groups into nurse training. An increase of 3% within a decade shows 11% of ethnic nursing & midwifery registered in 2000. ...read more.