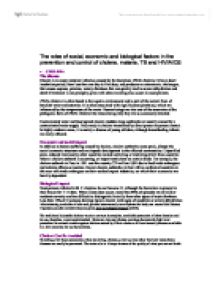 The roles of social, economic and biological factors in the prevention and control of cholera, malaria, TB and HIV/AIDS

The roles of social, economic and biological factors in the prevention and control of cholera, malaria, TB and HIV/AIDS * CHOLERA The disease Cholera is an acute intestinal infection caused by the bacterium Vibrio cholerae. It has a short incubation period, from less than one day to five days, and produces an enterotoxin, choleragen, that causes copious, painless, watery diarrhoea that can quickly lead to severe dehydration and death if treatment is not promptly given with often vomiting also occurs in most patients. Vibrio cholerae is often found in the aquatic environment and is part of the normal flora of brackish water and estuaries. It is often associated with algal blooms (plankton), which are influenced by the temperature of the water. Human beings are also one of the reservoirs of the pathogenic form of Vibrio cholerae the reason being why they are so commonly attacked. Contaminated water and food spread cholera. Sudden large outbreaks are usually caused by a contaminated water supply. Only rarely is cholera transmitted by direct person-to-person contact. In highly endemic areas, it is mainly a disease of young children, although breastfeeding infants are rarely affected. Economic and social impact In addition to human suffering caused by cholera, cholera outbreaks cause panic, disrupt the social-economic structure and can impede development in the affected communities. Unjustified panic-induced reactions by other countries include curtailing or restricting travel from countries where a cholera outbreak is occurring, or import restrictions on certain foods. For example, the cholera outbreak in Peru in 1991 cost the country 770 million USD due to food trade embargoes and adverse effects on tourism. Recent cholera outbreaks in East Africa confronted countries in this area with trade embargoes on their seafood export industries, on which their economies are heavily dependent. Biological Impact Most persons infected with V. cholerae do not become ill, although the bacterium is present in their faeces for 7-14 days. ...read more.

In addition, there are now more women infected than men among the 24.5 million adults and 1 million children estimated to be living with HIV/AIDS in sub-Saharan Africa. The total spent on HIV prevention in sub-Saharan Africa (excluding South Africa) last year was $165 million from all sources. Current estimates now suggest that sums in the order of $ 2.5 billion are needed for prevention alone. Add the costs of care, and the figure rises dramatically. Biological Impact HIV is easily killed outside the human body and therefore can only be transmitted directly from person to person, either by sexual contact, exchange of blood or body fluids or from mother to child. Sexual transmission of the HIV is relatively inefficient and repeated unprotected exposures are normally required. HIV incidence and prevalence can vary greatly from country to country and even within countries, depending on several risk factors and risk behaviors. Since the HIV epidemic is driven mainly by sexual transmission, the level and intensity of risk behaviors (vaginal or anal unprotected sex) in a given community are the main determinants of the spread of the virus. These factors may determine the probability of exposure to HIV infection (e.g.: level and sextent of risk behaviours, high HIV prevalence in the community). Others may influence the probability of HIV transmission per exposure (e.g.: the prevalence of other sexually transmitted infections (STIs), levels of condom use, circumcision). In view of the importance of these determinants, information on risk factors obtained from behavioural surveillance studies and STI incidence and prevalence can help better explain epidemic curves and monitor the impact of interventions. The concept of 2nd generation HIV surveillance, introduced by WHO and UNAIDS, integrates AIDS and HIV surveillance with additional sources of essential data to better monitor the epidemic. HIV is accelerating the spread of TB! HIV and TB form a lethal combination, each speeding the other's progress. ...read more.

into the skin produced only a local lesion but was sufficient to stimulate the production of antibodies that would defend the body against the more virulent smallpox. Antibiotics are natural chemotherapeutic agents produced by microorganisms and are used to inhibit growth of pathogenic organisms. Most of which are only effective against bacteria. Vaccination has eradicated smallpox worldwide and prevents such diseases as cholera, rabies, and typhoid fever. Vaccines works with the immune system's ability to recognize and destroy foreign proteins (antigens) that it determines to be "nonself. Scientists are using this same principle to help the body recognize antigens peculiar to cancer cells. It is also applied in an experimental birth control vaccine that tricks the immune system into believing that human chorionic gonadotropin (HCG), a hormone secreted by a developing fertilized egg, is foreign, thus inactivating it and inducing menstruation even if fertilization has occurred. Vaccines are also used to control animal pests by conferring temporary infertility. The ability of an organism to resist disease by identifying and destroying foreign substances or organisms is it's immunity. Although all animals have some immune capabilities, little is known about nonmammalian immunity. Mammals are protected by a variety of preventive mechanisms, some of them nonspecific (e.g., barriers, such as the skin), others highly specific (e.g., the response of antibodies The widespread and indiscriminate use of antibiotics has led to growth and resistant strains of bacteria, which in turn could cause a health harzard in years for such diseases such as TB. * Reference: * http://www.who.int/inf-fs/en/fact094.html WHO Press Releases, Fact Sheets and Features as well as other information on this subject can be obtained on Internet on the WHO home page http://www.who.ch/ See I. Cohen et al., ed., Auto-Immunity (1986); S. Sell, Immunology, Immunopathology, and Immunity (1987); R. Langman, The Immune System (1989); E. Sercarz, ed., Antigenic Determinants and Immune Regulation (1989); J. Kreier, Infection, Resistence, and Immunity (1990) * http://www.cdc.gov/health/diseases.htm- control of disease and center. * Human Health and disease By Richard Fosbery-Cambridge University Press ...read more.