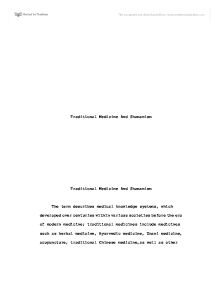 Traditional Medicine And Shamanism Traditional Medicine And Shamanism The term describes medical knowledge systems, which developed over centuries within various societies before the era of modern medicine; traditional medicines include medicines such as herbal medicine, Ayurvedic medicine, Unani medicine, acupuncture, traditional Chinese medicine,as well as other medical knowledge and practices all over the globe. WHO defines Traditional Medicine as "the medicine that refers to health practices, approaches, knowledge and beliefs incorporating plant, animal and mineral based medicines, spiritual therapies, manual techniques and exercises, applied singularly or in combination to treat, diagnose and prevent illnesses or maintain well-being". Countries in Africa, Asia and Latin America use traditional medicine (TM) to help meet some of their primary health care needs. In Africa, up to 80% of the population uses traditional medicine for primary health care. In industrialized countries, the term traditional medicine is very often confused with the term alternative medicine. One of the core disciplines, which studies traditional medicines, is ethnomedicine. The vegetalista is the authority on what should be dieted and thus it is not surprising to find a concurrence between the initiatory diet and people''s ideas about unhealthy or polluting foods. While it is an immensely popular dish pork is regarded as the most important dietary proscription (see Luna 1988:52) , said to be toxic to humans when they are in states of illness or following the ingestion of `plantas maestras''. There even exists a law stipulating the distance from human settlement at which a pig farm may be located. ...read more.

This is believed to be accomplished by traversing the axis mundi and forming a special relationship with, or gaining control over, spirits. Shamans have been credited with the ability to control the weather, divination, the interpretation of dreams, astral projection, and traveling to upper and lower worlds. Shamanistic traditions have existed throughout the world since prehistoric times. Some anthropologists and religion scholars define a shaman as an intermediary between the natural and spiritual world, who travels between worlds in a trance state. Once in the spirit world, the shaman would commune with the spirits for assistance in healing, hunting or weather management. Ripinsky-Naxon describes shamans as, "People who have a strong interest in their surrounding environment and the society of which they are a part." Other anthropologists critique the term "shamanism", arguing that it is a culturally specific word and institution and that by expanding it to fit any healer from any traditional society it produces a false unity between these cultures and creates a false idea of an initial human religion predating all others. However, others say that these anthropologists simply fail to recognize the commonalities between otherwise diverse traditional societies. Shamanism is based on the premise that the visible world is pervaded by invisible forces or spirits that affect the lives of the living. In contrast to animism and animatism, which any and usually all members of a society practice, shamanism requires specialized knowledge or abilities. It could be said that shamans are the experts employed by animists or animist communities. ...read more.

Because of this, Kehoe is also highly critical of the notion that shamanism is an ancient, unchanged, and surviving religion from the Paleolithic period. Also Hopp�l discusses, whether the term "shamanism" is appropriate. He recommends using term "shamanhood" for stressing the diversity, the specific features of the discussed cultures. This is a term used in old Russian and German ethnographic reports at the beginning of the 20th century (p. 15, par. 3 of [6]). This term may suggest generalizations less and stress the local variations more. He mentions similar thoughts on ISSR, 2001 Summer, he conjectures also a contemporary paradigm shift. Conclusion We have observed the important place of the traditional use of psychotropic plants within Peruvian culture, noting how this use has not led to dependency but instead represents a dynamic set of interdependencies between man and environment. In contrast, non-traditional cultivation of coca and measures introduced to control it have brought production and consumption of manufactured drugs into communities very distant from the urban centres formerly associated with drug abuse. Notes Blain, Jenny, Nine Worlds of Seid-Magic: Ecstasy and neo-Shamanism in North European Paganism. 2002. London: Routledge. ISBN 0-415-25651-8 Joseph Campbell, The Masks of God: Primitive Mythology. 1959; reprint, New York and London: Penguin Books, 1976. ISBN 0-14-019443-6 Mircea Eliade, Shamanism: Archaic Techniques of Ecstasy. 1964; reprint, Princeton, NJ: Princeton University Press, 2004. ISBN 0-691-11942-2 Michael Harner: The Way of the Shaman. 1980, new edition, HarperSanFrancisco, 1990, ISBN 0-06-250373-1 �ke Hultkrantz (Honorary Editor in Chief): Shaman. Journal of the International Society for Shamanistic Research Joan Halifax, ed. Shamanic Voices: A Survey of Visionary Narratives. 1979; reprint, New York and London: Penguin, 1991. ...read more.