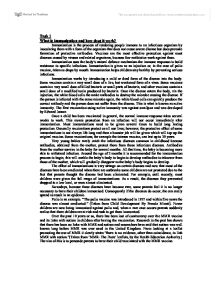 What is immunisation and how does it work?

Task 1 What is immunisation and how does it work? Immunisation is the process of rendering people immune to an infectious organism by inoculating them with a form of the organism that does not cause severe disease but does provoke formation of protective antibodies. Vaccines are the most effective protection against most diseases caused by viruses and related organisms, because few antibiotics work against them. Immunisation uses the body's natural defence mechanism-the immune response-to build resistance to specific infections. Immunisation is given as an injection or, in the case of polio vaccine, taken as drops by mouth. Immunisation helps children stay healthy by preventing serious infections. Immunisation works by introducing a mild or dead form of the disease into the body. Some vaccines contain a very small dose of a live, but weakened form of a virus. Some vaccines contain a very small dose of killed bacteria or small parts of bacteria, and other vaccines contain a small dose of a modified toxin produced by bacteria. Once the disease enters the body, via the injection, the white blood cells the make antibodies to destroy the microbe causing the disease. If the person is infected with the same microbe again, the white blood cells can quickly produce the correct antibody and the person does not suffer from the disease. This is what is known as active immunity. ...read more.

autism compared with age at administration of one or two doses of MMR vaccine and the age at diagnosis of autism for children who received no MMR vaccine. There was statistically no difference between the groups. "In all instances, the relative incidence is not significantly different from 1, indicating no association between vaccination and autism in the subsequent risk period." The authors proceed by proclaiming their results do not support the hypothesis that MMR or measles containing vaccines cause autism at any time after vaccination. A leading article and commentary in `Archives of Disease in Childhood' (September 2001) - the journal of the Royal College of Paediatrics and Child Health - provides further support for the vaccine. It reviews the evidence on MMR safety and identifies the arguments why separate vaccines are not an alternative to MMR. The authors conclude: "There is no good scientific evidence to support a link between MMR vaccine and autism or inflammatory bowel disease; indeed there is mounting evidence that shows no link. While the final decision rests with the parents, the evidence of the safety and efficacy of MMR vaccine is so overwhelmingly conclusive that health professionals should have no hesitation in recommending its use". This illustrates once again that there is no link between autism and the MMR vaccine, which suggests that the MMR vaccine is safe to use and cannot cause autism. ...read more.

Before the controversy with the MMR vaccine there was a cause for concern in the 1970s when a study pointed to a link between the whopping cough vaccine and brain damage in babies, but more up-to-date research has failed to find a link. This demonstrates that scientists were working to try and protect children from these vaccines, which they thought were harmful. Most vaccines protect us against disease and since the introduction of vaccination many of the diseases have been eradicated. Even though some diseases have been eradicated it is important that we are still protected because if there is a sudden outbreak then we know that we have been immunised. Immunisation is very important in the early years of life as some diseases can be fatal to young children and we needed to be protected all through our life so that are bodies are immune to diseases and there is less chance of illness. Although there has been a lot controversy over the MMR vaccine it is now up to parents to decide whether they should protect their child or whether they should stay unprotected and prone to disease. It is much safer for your child to be immunised and the risk of harmful complications from any of these vaccines is very small - very much smaller than the risk of harmful effects from the disease itself. There are very few genuine reasons why a child should not be immunised. ...read more.