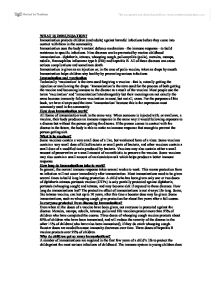 WHAT IS IMMUNISATION? Immunisation protects children (and adults) against harmful infections before they come into contact with them in the community. Immunisation uses the body's natural defence mechanism - the immune response - to build resistance to specific infections. Nine diseases can be prevented by routine childhood immunisation - diphtheria, tetanus, whooping cough, poliomyelitis (polio), measles, mumps, rubella, Haemophilus influenzae type b (Hib) and hepatitis B. All of these diseases can cause serious complications and sometimes death. Immunisation is given as an injection or, in the case of polio vaccine, taken as drops by mouth. Immunisation helps children stay healthy by preventing serious infections. Immunisation and vaccination Technically 'vaccination' is the term used forgiving a vaccine - that is, actually getting the injection or swallowing the drops. 'Immunisation'is the term used for the process of both getting the vaccine and becoming immune to the disease as a result of the vaccine. Most people use the terms 'vaccination' and 'immunisation'interchangeably but their meanings are not exactly the same because immunity follows vaccination in most, but not all, cases. ...read more.

Some immunisations, such as whooping cough, give protection for about five years after a full course. Is everyone protected from disease by immunisation? Even when all the doses of a vaccine have been given, not everyone is protected against the disease. Measles, mumps, rubella, tetanus, polio and Hib vaccines protect more than 95% of children who have completed the course. Three doses of whooping cough vaccine protects about 85% of children who have been immunised, and will reduce the severity of the disease in the other 15% of children (who have also been immunised), if they do catch whooping cough. Booster doses are needed because immunity decreases over time. Three doses of hepatitis B vaccine protects over 95% of children. Why do children get so many immunisations? A number of immunisations are required in the first few years of a child's life to protect the childagainst the most serious infections of childhood. The immune system in young children does not work as well as the immune system in older children and adults, because it is still immature. ...read more.

There are some diseases that can kill children or cause lasting damage to their health, and sometimes your child's immune system needs help to fight those diseases. Immunisation provides that help. When to have your child immunised Your child should have their first immunisations at two months old. They will be given further doses of these immunisations when they are three months old and four months old. Other immunisations are given at around 13 months old, then between three and five years old (before your child starts school), and in their teenage years. Some immunisations have to be given more than once to build up your child's immunity (protection). This top-up dose is sometimes called a booster. You will be sent an appointment inviting you to bring your child for their immunisations. Most doctors' surgeries and health centres run special immunisation or baby clinics. You can often drop in at other times if you can't get to the clinic during the day. It is important that your child has their immunisations at the right age. This will help keep the risk of your child catching these diseases as low as possible. The risk of side effects from some vaccines may increase if you delay them. ...read more.