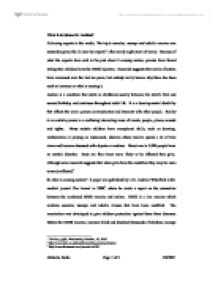 What is to blame for Autism?

What is to blame for Autism? Following reports in the media, 'the triple measles, mumps and rubella vaccine was yesterday given the all clear by experts'1 after nearly eight years of worry. Because of what the experts have said in the past about it causing autism, parents have feared letting their children have the MMR injection. Research suggests that levels of autism have increased over the last ten years, but nobody really knows why there has been such an increase or what is causing it. Autism is a condition that starts in childhood usually between the child's first and second birthday, and continues throughout adult life. It is a developmental disability that affects the way a person communicates and interacts with other people. Reality to an autistic person is a confusing interacting mass of events, people, places, sounds and sights. Many autistic children have exceptional skills, such as drawing, mathematics or playing an instrument, whereas others tend to spend a lot of time alone and become obsessed with objects or routines. About one in 2,000 people have an autistic disorder. ...read more.

It was then suggested by media reports that it may be safer to give MMR in three separate injections, or give parents the choice. Giving MMR in separate vaccines could cause the child more distress, courses of the vaccine would probably not be completed for that reason, causing an increase in the cases of these three diseases. MMR is highly effective and has been responsible for almost wiping out these diseases and is given to over ninety per cent of children in the UK. Autism starts to develop or starts to be noticed at around the same age that the vaccine is given, so it is tempting to assume that there is a connection between them. Over 500 million doses of MMR have been used in over 100 countries around the world since the early 1970s. The World Health Organisation recognises MMR as a highly effective vaccine with an outstanding safety record.4 Research from Japan studied autism rates in over 31,000 children up to the age of seven, who were born before and after the MMR injection was withdrawn. ...read more.

According to Dr Orenstein, "not all mercuries are the same; there is a major difference between traditional mercury and thimerosal mercury."5 Mercury is a poisonous, metallic element that has a natural occurrence within our environment. It is also formed by a number of man-made sources, such as coal mining and power plants, causing an increase in mercury and other chemicals to be released into our atmosphere. Mercury in the atmosphere then settles in seas and lakes contaminating the fish that we eat, which then makes the contaminated fish the prime cause of human exposure to mercury. After all the reports and research that has been worked on over the years concerning autism, there is still no answer as to what is causing it, there are a lot of suggested links but no real evidence. Is autism genetic, caused by an imbalance in our genes? Is it caused by environment issues that we are to blame for? Who knows? 1 The Sun, pg26, Wednesday, October, 19, 2005 2 http://www.bbc.co.uk/health/conditions/autism2/shtml 3 http://www.thelancet.com/journal/vol362 4 WHO, 2001 5 http://www.medscape.com/viewarticle/514585 ?? ?? ?? ?? Michelle Bodle Page 1 of 3 5/9/2007 ...read more.