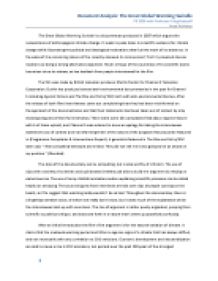 ﻿Document Analysis: The Great Global Warming Swindle PO1006 with Professor Oleg Kobtzeff Anya Verkamp ________________ The Great Global Warming Swindle is a documentary produced in 2007 which argues the nonexistence of anthropogenic climate change. It seeks to poke holes in scientific evidence for climate change while illustrating the political and ideological motivations that fuel the myth of its existence. In the wake of the convincing nature of the recently released An Inconvenient Truth it provoked diverse reactions as being a strong alternative argument. Much critique of the soundness of its scientific claims has arisen since its release, as has backlash from people interviewed for the film. The film was made by British television producer Martin Durkin for Channel 4 Television Corporation. Durkin has produced several anti-environmental documentaries in the past for Channel 4 including Against Nature and The Rise and Fall of GM, both with anti-environmental themes. After the release of both films interviewees came out complaining that they had been misinformed on the approach of the documentaries and that their statements had been taken out of context by only showing snippets of their full interviews. There were some 151 complaints filed about Against Nature with 4 of these upheld, and Channel 4 was ordered to issue an apology for taking the interviewees statements out of context and not informing them of the nature of the program they would be featured in (Programme Complaints & Interventions Report). ...read more.

The suggestion that the global mean surface temperature since the mid 19th century has increased by only 0.5°c is blatantly incorrect as it has risen by roughly 1°c since 1880 (Sato). It’s logical for temp increase to not coincide per year with decade long periods of economic growth, as it usually takes about that long for CO2 emissions to have any effect on climate (Piani). When showing a cooling during the post war economic boom on a graph, they have omitted the period after 1980, making the cooling appear longer, and the warming less severe. This temperature graph is attributed to NASA, but hardly resembles that of NASA, as NASA’s doesn’t show a tremendous drop from 1940 to 1970, but rather stabilization that then increases much faster. Dr. Eigil Friis-Christensen one of the “senior scientists at the Danish Meteorological Institute” has stated that his views were misrepresented in the film, suggesting his comment was taken out of context. He also said that the one of his graphs appeared to be falsified (Laut). The movie also fails to disclose that the 1991 paper it references has been academically refuted since then (Laut). Margaret Thatcher gave two speeches to the Royal Society, neither of which mentions the funding of climate science (Speech to Royal Society). The IPCC was not simply invented within the UK. It was established by two UN Organizations, the World Meteorological Organization and the United Nations Environment Program to assess “the scientific, technical and socioeconomic information relevant for the understanding of the risk of human-induced climate change.” (History of the IPCC) ...read more.

Many sweeping serious accusations are made against large bodies of scientific and political authority with only outdated or irrelevant evidence to back them up. The evidence that is provided is the testimonial of several individuals who were either misrepresented, have conflicts of interest, or simply aren?t educated or experienced in the topic they?re addressing (Extracts from Ofcom Complaint). It?s true the media approaches climate change from a biased, sensationalist perspective, however, their influence on climate science is overstated in the film. The media doesn?t influence governmental spending on research into climate change. If investigation is conducted, it?s because the scientific community has found reason for concern, and detected possible social impact. Scientists don?t conduct research because of popular interest. If they did, there?d be extensive studies on paranormal activity and extraterrestrials. The possible political action promoting climate change isn?t well argued in the film. It gives the idea Margaret Thatcher was the only political leader with an interest in promoting climate change, which would hardly account for it?s now global influence. To include other leaders? possible bias towards promoting green energy would have made for a stronger argument. It is a shame that the Global Warming Swindle failed in this way. As a counter argument it stood to have a positive effect on public discussion of global warming, which can at times be over emotional and extreme. Unfortunately, the illogical downfalls of the film have been made aware by many complaints from interviewees and outside academic bodies, essentially dismissing its consideration because of its inaccuracy. Judging by Durkin?s record, we can count on many such films to continue to be released in the future. ...read more.