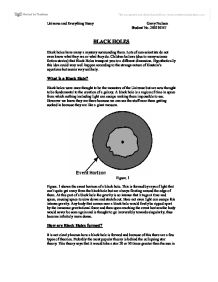 BLACK HOLES Black holes have many a mystery surrounding them. Lots of non-scientists do not even know what they are or what they do. Children believe (due to many science fiction stories) that Black Holes transport you to a different dimension. Hypothetically this idea could very well happen according to the strange nature of Einstein's equations but seems very unlikely. What is a Black Hole? Black holes were once thought to be the monsters of the Universe but are now thought to be fundamental to the creation of a galaxy. A black hole is a region of time in space from which nothing including light can escape making them impossible to see. However we know they are there because we can see the stuff near them getting sucked in because they are like a giant vacuum. Figure. 1 Figure. 1 shows the event horizon of a black hole. This is formed by rays of light that can't quite get away from the black hole but are always floating around the edge of them. ...read more.

They are perfectly spherical which only depend on their mass to determine what size they are, and only black holes with the same mass are identical. A New Zealander called Roy Kerr (photo on right) was the man to discover how to describe a rotating black hole. These black holes rotate at a normal speed only their mass and velocity of rotation determine their size and shape. There are different descriptions of rotations. If the rotation is zero, the black hole is perfectly round and identical to a non-rotating black hole. If the rotation is one, the black hole bulges and the faster it rotates the more it bulges. Finally, if the rotation is two the black hole looks the same if it makes half of a full rotation. Scientists have figured out that black holes eventually settle down and stop rotating. An electrically charged black hole has two event horizons thus has two places where time appears to stop. The inner event horizon starts to get larger as more and more electric charge is thrown into the black hole. ...read more.

When a black hole was part of this system, it would pull gaseous material off the surface of a neighbouring star and the gaseous material would spiral into the black hole. This is called an accretion disk. White holes A white hole is an additional singularity of a Schwarchild black hole. A white hole is thought to show opposite features to a black hole. It supposedly repels matter whereas a black hole sucks in matter with a huge attractive force of gravity. There is a theory about white holes although never observed. They are said to be a missing link between our universe and another, releasing matter that for us is lost into the black hole. Conclusion Although there are still many mysteries surrounding black holes, we assume them to exist from our findings of what happens to the matter. Also, as many people also think that there is only one kind of black holes we have also shown through our findings that there are many different kinds of them and they will continue to make a mark on our universe. Universe and Everything Essay Garry Neilson Student No. 200110147 ...read more.