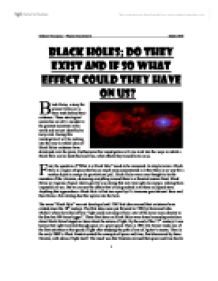 Black Holes - Do they exist and if so what effect could they have on us?

Black Holes; Do They Exist And If So What Effect Could They Have On US? B lack Holes, a story for science fiction or is there truth behind their existence. These astrological anomalies are still a wonder to the greatest scientists in the world and not yet identified to truly exist. During this investigation I will be looking into the way in which ideas of Black Holes existence have developed over the years. Furthermore this investigation will also look into the ways in which a Black Hole can be identified and if so; what effects they would have on us. F irst, the question of "What is a Black Hole" needs to be answered. In simple terms a Black Hole is a region of space that has so much mass concentrated in it that there is no way for a nearby object to escape its gravitational pull. Black Holes were once thought to be the monsters of the Universe, devouring everything around them in a frenzied cosmic feast. Black Holes are regions of space where gravity is so strong that not even light can escape, making them impossible to see. But we can see the debris that is being sucked in to these collapsed stars. Anything that approaches a Black Hole is first torn apart by it's immense gravitational force and then forms a flat rotating disc that spirals into the hole. The name "Black Hole" was not developed until 1967 but ideas around their existence have existed since the 18th century. ...read more.

of friction and gravity acting upon it; therefore it must have just enough kinetic energy at take off in order to overcome these forces and still have a little energy in order to continue moving. When considering motion near the surface of the body the force of gravity ?E gained when the object rises through a distance ?r is given by the formula: ?E = mg?r But as the object moves away from the body the forces of gravity acting upon it will decrease. We know that g = GM R Here r is the distance from the centre of the body and G is the universal gravitational constant. In order to find the overall change in energies the contributions from a sequence of small height increments each of ?r need to be added together. This can be done using algebra giving the equations: E = ?mgdr = ?GMm = GMm r R In an interaction the total energy is always the same and be calculated by adding the kinetic energy and the potential energy; the two are proportional and so as one changes so does the other. At the point at which an object reaches the escape velocity the kinetic energy will become 0 and so we can combine the formula above to give: 1/2 mv = GMm R If we cancel m and rearrange the formula we can gain a formula which represents the velocity which an object will need to escape the body. The formula being: v = 2GMm R For the body to be a Black Hole v = or is greater than c and so the formula becomes: c ? ...read more.

These forces get more and more intense as you get closer to the centre, and eventually they will rip you apart. Therefore the experience of entering a black hole would be short lived and you would not be able to tell the tale, as a). you would be dead and b). you would not be able to escape from the black hole to tell the tale! If you were able to live through entering a black hole though you would see images of faraway objects as all light would be sucked into the black hole. But these images would be distorted in strange ways, since the Black Hole's gravity bends light, apart from this and other debris that has been sucked in with you there will be very little to see. Even though light can not escape from a black hole (and so they can not be seen); light from the outside can still be seen. It is from these ideas that some predictions state that upon entering a Black Hole; time would be distorted and potentially you could view the end of the world as all light is sucked into the Black Hole. B lack Holes are still a mystery and are on the for front of modern astrological science. Many questions still need to be answered around if they truly do exist or if they are just myths (in the same way that once we believed the world to be flat!) Until we experience a black hole however we may never be able to answer these questions; but by then it could be too late! Richard Thompson - Physics Coursework March 2002 1 1 ...read more.