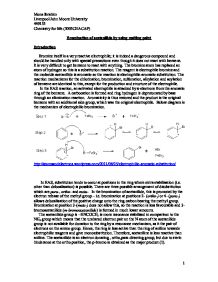 Bromination of acetanilide by using melting point Introduction Bromine itself is a very reactive electrophile; it is indeed a dangerous compound and should be handled only with special precautions even though it does not react with benzene. It is very difficult to get benzene to react with anything. The bromine atom has replaced an atom of hydrogen so this is a substitution reaction. The reagent is electrophile bromine and the molecule acetanilide is aromatic so the reaction is electrophilic aromatic substitution. The reaction mechanisms for the chlorination, bromination, sulfonation, alkylation and acylation of benzene are identical to this, except for the production and structure of the electrophile. In the EAS reaction, an activated electrophile is attacked by ?-electrons from the aromatic ring of the benzene. A carbocation is formed and ring hydrogen is deprotonated by base through an elimination reaction. Aromaticity is thus restored and the product is the original benzene with an additional side group, which was the original electrophile. Below diagram is the mechanism of electrophilic bromination. http://atomsandelectrons.wordpress.com/2011/08/25/electrophilic-aromatic-substitution/ In EAS, substitution tends to occur at positions in the ring where extra stabilisation (i.e. other than delocalisation) is possible. There are three possible arrangement of disubstitution which are para-, ortho- and meta- In the bromination of acetanilide, this is promoted by the electron release of the methyl group - i.e. ...read more.

The excess of bromine was destroyed by adding aqueous sodium hydrogen sulphite solution until the brown color of bromine was discharged. Approximately 100 cm3 of water was put into a 250 cm3 glass beaker and was poured the reaction mixture into it, whilst it was stirred with a glass rod. The reaction flask was rinsed with water using the wash bottle which was transferred any residue and also was to break up the solid in the beaker which was dispersed the solid particle and then the reaction mixture was transferred to the open bench. The solid was filtered by suction filtration using a Buchner funnel and was washed with distilled water (2x25 cm3 portions). Before it was transferred into 100 cm3 conical flask, the water was removed from the solid as possible by suction filtration. The product was recrystallise and it was used a mixture of ethanol: water (2:1) and it was a minimum mixture at its boiling point and portions was added using the steam bath (50 cm3 was more than enough), until all the crystal was cleared and it was set aside to cool to a near room temperature and then the flask was cooled thoroughly in an ice/water bath mixture. ...read more.

Another type error. If more ethanol is added in recrystallization then the melting point would lower and become more soluble which make the product ortho- instead of para-. Finally, there is another way to identify p-bromoacetanilide using NMR spectra, a copy of a typical NMR shift table has been included as Table below shown. It can also be used to distinguish the para-isomer from its meta- and ortho-substituted isomers in which there four different types of aromatic hydrogens, each with integration one. Conclusion To sum it up, the product is p-bromoacetanilide as the observed melting point and the literature value are close as it shown in the result. The highest the percentage yields the better the purity of p-bromoacetanilide. Furthermore, melting point is a good method of determining the purity of p-bromoacetanilide. Another way of identifying the product is by using NMR spectra. Reference (1) College Practical Chemistry by V K Ahluwalia, Sunita Dhingra Adarsh Gulati Page 238 (2) http://www.dst.gov.in/green-chem.pdf (3) Lecture notes from Professor Mark Wainwright- Aromatic Chemistry (4) Organic chemistry; structure and function, 6th edition, Peter Vollhardt, Neil Schore-published 2009 page 674 (5) Organic synthesis, Michael B.Smith, McGraw Hill international editions page 186-191 ?? ?? ?? ?? Mona Ibrahim Liverpool John Moore University 449155 Chemistry for life (5005CHACAP) 1 ...read more.