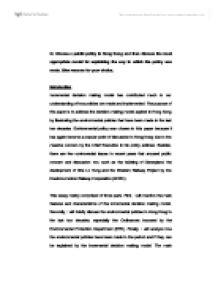 Choose a public policy in Hong Kong and then discuss the most appropriate model for explaining the way in which the policy was made. Give reasons for your choice.

Q: Choose a public policy in Hong Kong and then discuss the most appropriate model for explaining the way in which the policy was made. Give reasons for your choice. Introduction Incremental decision making model has contributed much to our understanding of how policies are made and implemented. The purpose of this paper is to address the decision making model applied in Hong Kong by illustrating the environmental policies that have been made in the last two decades. Environmental policy was chosen in this paper because it has again become a popular point of discussion in Hong Kong due to the massive concern by the Chief Executive in his policy address. Besides, there are few controversial issues in recent years that aroused public concern and discussion too, such as the building of Disneyland, the development of Sha Lo Tung and the Western Railway Project by the Kowloon-Canton Railway Corporation (KCRC). This essay mainly comprised of three parts. First, I will mention the main features and characteristics of the incremental decision making model. Secondly, I will briefly discuss the environmental policies in Hong Kong in the last two decades, especially the Ordinances imposed by the Environmental Protection Department (EPD). Finally, I will analyze how the environmental policies have been made in the period and if they can be explained by the incremental decision making model. ...read more.

Apart from this general provision, there are Waste Disposal (Chemical Waste) General Regulations; Waste Disposal (Livestock Waste) Regulations; and Import and Export of Waste Control (EPD, 2003). Environmental Policy-making since 1980s Nowadays, the pollution problem still exist in Hong Kong, though the government has put extensive attention and resources it. Since 1980s, nevertheless, the major sources of pollution in Hong Kong are not only from households or factories, but also attributed to the developments and construction projects carried out by both the private developers and government itself. In fact, environmental degradation is not just an incidental and unwanted result of some minor deficiencies in the economic process. Rather, its roots may go as deep as the decision-making mechanisms at work within the economic process and the social and political forces that operates on it. Undoubtedly, some development proposals and projects could bring significant benefits to the Hong Kong community. However, they also have the potential to cause environmental damage unless they adopt environmentally sound design and implementation practice. Instead of looking for a perfect policy or full solution to the environmental problems, the Hong Kong government may alleviate the problem on a step-by-step basis by using the following two means. ...read more.

The Lok Ma Chau Spur Line project of KCRC, another example, it showed the conflicts between the preservation of a natural habitat and the land development. From case to case, there are diverse opinions and arguments from different groups of people, that consist of both the support and against of the projects. For economic consideration, the developers and business side are absolutely positive, while some scholars and green groups like Greenpeace and Civic Exchange, are highly against the projects. As consequences, consensus and compromise would be resulted in the environmental policy making process after bargaining and negotiation between different parties. It is one of the characteristics of incremental decision making approach too. Conclusion This paper began with the main features and characteristics of the incremental decision making model. After examining the above model, there is a discussion of environmental policy making of Hong Kong government in recent decades. Most importantly, the paper proved that the incrementalism is applicable to environmental policy making in Hong Kong as it illustrated many features of the model. Among the decision making models, such as the rational comprehensive model, incrementalism, mixed scanning and contingency model, each of them have its own merits and drawbacks. There is no concrete conclusion to tell which one is the best in public policy making. Instead, it is mainly depending on the nature of the policy as well as the degree of urgency. ...read more.