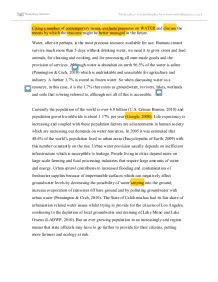 Citing a number of contemporary issues, evaluate pressures on water and discuss the means by which the resource might be better managed in the future.

Citing a number of contemporary issues, evaluate pressures on WATER and discuss the means by which the resource might be better managed in the future. Water, after air perhaps, is the most precious resource available for use. Humans cannot survive much more than 5 days without drinking water, we need it to grow crops and feed animals, for cleaning and cooking, and for processing all man made goods and the provision of services. Although water is abundant on earth 96.5% of the water is saline (Pennington & Cech, 2010) which is undrinkable and unsuitable for agriculture and industry. A further 1.7% is stored as frozen water. So when discussing water as a resource, in this case, it is the 1.7% that exists as groundwater, in rivers, lakes, wetlands and soils that is being referred to, although not all of this is accessible. Currently the population of the world is over 6.8 billion (U.S. Census Bureau, 2010) and population growth worldwide is about 1.17% per year (Google, 2008). Life expectancy is increasing and coupled with these population factors are advancements in human society which are increasing our demands on water resources. ...read more.

As glaciers retreat, the amount of freshwater available during spring and summer times declines, having major repercussions on the availability of water long term. Tajikistan, a country with over 8000 glaciers providing freshwater to its rivers, is experiencing diminished water flow from the glaciers (Oxfam, 2010). Canadians in British Columbia have similar concerns as snowpacks, which usually recharge lakes and rivers, remained at low levels this winter (The Vancouver Sun, 2010). Increasingly dams have been used as an answer for large scale domestic and irrigation supply, so much so that by the end of the 20th century at least 45,000 large dams had been built worldwide (World Commission on Dams, 2000). But dams by their nature block the flow of sediment and nutrients downstream, allowing trapped vegetation to rot, letting off methane gas and disrupting fish migration often having huge repercussions for communities downstream. Also it is not unusual for rivers to cross more than one border, and this may contribute to political tension. Currently a drought in SE Asia has seen water levels of the Mekong river drop which is causing suspicion and anger to be directed at China, who are also experiencing drought, and have four dams built upstream (Probe International, 2010). ...read more.

The greatest inefficiency of all water use is in the agricultural sector, and greater management and technological advancement is needed in this area. In the past water resources for farming was managed more efficiently, but this has been pushed out by mass irrigation. Precision agriculture consists of using sensing equipment such as GPS and historical maps to deliver inputs such as water and fertilizer where and when needed by the crop (Bongiovanni & Lowenberg-Deboer, 2004). Drip-fed irrigation is the most efficient in that it delivers water to the plant roots rather than spraying it into the air, thus reducing evaporation and enhancing soil quality (Black & King, 2009). Hydroponics is a soil-less style of growing which can also be water efficient and recently has been coupled with aquaculture. Aquaponics, as it is termed, uses "nutrient rich effluent from fish tanks to fertigate hydroponic production beds" (Aquaponics, 2006). Projects like this increase water use efficiency and a greater realisation of the pressures on our water resources will see projects like this being rewarded for forward thinking and water stewardship. All in all we need to realise the value of our freshwater system and understand the inefficiencies and flaws in our use of it which has created reason for concern. Without this vital understanding our planet may be pushed to its extreme. ...read more.

Overall this is a good discussion of some of the key issues affecting water supplies in the world. There is evidence of extensive relevant research. It could be improved by being clearer about the issues and pressures. Where are the biggest problems? Which countries or users are being most wasteful? Who is being more efficient? And why? It would also benefit from a more thorough conclusion.