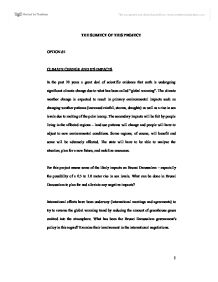 Climate change and its impacts.

THE SUBJECT OF THIS PROJECT OPTION #5 CLIMATE CHANGE AND ITS IMPACTS In the past 10 years a great deal of scientific evidence that earth is undergoing significant climate change due to what has been called "global warming". The climate weather change is expected to result in primary environmental impacts such as changing weather patterns (increased rainfall, storms, draughts) as well as a rise in sea levels due to melting of the polar icecap. The secondary impacts will be felt by people living in the affected regions - land use patterns will change and people will have to adjust to new environmental conditions. Some regions, of course, will benefit and some will be adversely affected. The state will have to be able to analyze the situation, plan for a new future, and mobilize resources. For this project assess some of the likely impacts on Brunei Darussalam - especially the possibility of a 0.5 to 1.0 meter rise in sea levels. What can be done in Brunei Darussalam to plan for and alleviate any negative impacts? International efforts have been underway (international meetings and agreements) to try to reverse the global warming trend by reducing the amount of greenhouse gases emitted into the atmosphere. What has been the Brunei Darussalam government's policy in this regard? Examine their involvement in the international negotiations. INTRODUCTION WHAT IS "GLOBAL WARMING"? Global warming, as defined in the Oxford dictionary is the increase in temperature of the earth's atmosphere, caused when certain gases, especially carbon dioxide, trap the sun's heat. These gases are called the 'Greenhouse Gases', namely (the major contributors) carbon dioxide, CFCs1, methane and nitrous oxide. The natural2 greenhouse gases are CO23, CH44, O35, halocarbons and nitrous oxide. Though, these gases are also contributed by human activities. Combustion of fossil fuels increases the concentration of these natural greenhouse gases in the atmosphere. These gases let in sunlight but tend to insulate the planet against the loss of heat. Thus, a higher concentration means a warmer climate. ? ...read more.

The contribution of open burning to episodes of severe haze in the country has also not been properly studied. Forest Fires * Due to occurrences of dry spells vegetation fires occur quite frequently in Brunei Darussalam. As recorded by the Fire Department there were 382 reported cases of vegetation fires in 1994 that destroyed around 390 hectares of vegetation cover. The highest recorded occurrences of forest fires recorded in forest reserves were from May to September. * The causes for the majority of the fires were unknown. But, for all known causes they were a result of open burning activities. Local vegetation fires can be argued as the major contributor for occurrences of haze episodes in the country but, their effect are mainly localized. Other Sources * The other sources of pollutants which could be potential contributors of haze episodes include volcanic eruptions and as a result of man's activities. The eruption of Mt. Pinatubo, Philippines in 1991 was responsible for the volcanic fallout experienced in the Country. It was reported that as much as 0.024 g/sq. m of ash fell over Brunei Darussalam over a 24-hour period on June 15. However the contribution of Mt. Pinatubo eruption towards the severe haze episode in 1991 was not established. * In April 1989 gas caught fire when a well blow out occurred in Rasau, Brunei Darussalam. The fire lasted from the 25th of April to the 8th of May. As a result thick smoke covered most part of Kuala Belait and Seria. Soot was also deposited in the area. * Earthworks and construction activities in Brunei Darusssalam is presently very active and is a potential source of dust. High dust levels of 240 ug/m3 have been recorded in residential and town areas. In an effort to control dust pollution, trucks carrying earth or gravel are required to cover their load. Dusty work sites are also asked to sprinkle water so as to suppress dust particles. ...read more.

Thus, there would be less of the temperature difference that drives big storms. History and the science of climatology indicate that we have nothing to fear. Any global warming in the twenty first century should be modest, bringing back one of the most pleasant and productive environments humans - and wildlife - have never enjoyed. APPLICATION OF THEORETICAL PERSPECTIVES IN SOLUTIONS. Functionalist Theory In a functionalist view, society is a network of institutions, e.g. marriage and religion, that are related to and dependent on one another. According to this theory, a measurable change in one institution would cause a change in the others. In the case of global warming, everybody believes that it could bring much disaster to the world. Therefore, each and every institution in a society or country should work together in order to eliminate or reduce future negative impacts. Interactional Theory It is up to an individual for him/her to do what is considered right. A person's action is either frontstage or backstage, in other words, his/her actions are either acceptable or non-acceptable by the society. The people who damages the environment should have their eyes opened up to the impacts of the coming global warming, which could be decreased by better attitudes toward saving the environment. Conflict Theory This theory stresses on classes and class divisions. For the solution of global warming and the emission of greenhouse gases, people who are in the upper class should be responsible in controlling the people in the lower class. This is because, the people in the upper class are more respected and their voices are always heard. FOOTNOTES 1. Chlorofluorocarbons 2. Gases that are produced naturally by the environment 3. Carbon dioxide 4. Methane 5. Ozone 6. Gases produced by human activities 7. Gases produced biologically (naturally) 8. Animal of the type that brings back food from its stomach and chews it again e.g. cows, sheep. 9. A total quantity of forest (or any living things) in a given area or volume 10. Hydrofluorocarbons 11. Hydrochlorofluorocarbons 12. Atoms of an element arranged in an alternative way 13. ...read more.