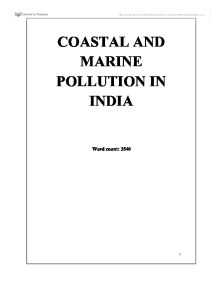 Coastal and marine pollution in India. In India most contamination from land base sources industrial and domestic wastes and agriculture run-off. Other activities are also becoming more significant like shipping and related actions ship breaking,

COASTAL AND MARINE POLLUTION IN INDIA Word count: 3540 INTRODUCTION: The change in physical, chemical and biological characteristics of water and sediments is called coastal pollution. A coastal zone can be described variously. One possible definition is "the coastal zone represents that part of the land affected by its proximity to the sea, and that part of the ocean affected by its proximity to the land" (US commission of marine Science, Engineering and Resource). Other possible definition is "the coastal zone as extending from the coastal plains to the outer edge of the continental shelves, approximately matching the region that has been alternately flooded and exposed during the region that has been alternately flooded and exposed during the sea-level fluctuations of the late Quaternary period" (LOICZ). This second definition is of the coastal domain from 200 meters above to 200 meters below sea levels. It is known universally that coastal areas are among the most sensitive zones around the world with the innumerable fleet of oil tankers, fishing vessels, cargo ships and cruise ships that navigate through the ocean and fish in our fiscal zone, our coastal zone and marine world are continuously under the danger of pollution. It is not surprising therefore that the government would want to apply every attempt to try and prevent such disaster from occurrence. The coastal area from 200 meters above to 200 meters below sea level: * Occupies 18% of the surface of the world. * Around a quarter of worldwide prime productivity occurs in this area. * Around 60% of human inhabitants live. * Population of over 1.6 million people with two third of world cities are located. * Supply's around 90% world fish catch. The coastal ocean accounts for: * 8% of the ocean surface. * Greater than 0.5% of the ocean volume. * Around 14% of global ocean production * Up to 50% of global oceanic denitrification. ...read more.

The movement and stretch of the fresh waters of the Ganga and Brahmaputra still needs detailed study. It is vital to understand shelf and estuarine (of which there are a very large number of varying sizes) flow, so that during efficient modelling relevant information is accessible to decision makers on movement of pollutants, sediments and offshore hazards (oil spills). POLLUTION ON INDIAN COASTS: The Arabian Sea is a main oil tankers way to South East Asia, and beyond, most likely secretarial for the tar like residues dump on the nest coast of India. This constant problem is however a serial trait is mainly synchronized by the monsoons and allied winds. Metals, being a conventional pollutant, need watchful monitoring since they stay forever in the atmosphere without break-down. As yet our waters are clear. DDT which has been prohibited in most Western countries had been extensively used in Indian agriculture. It was to blame for raise in agricultural production and eradicating of numerous vector borne diseases. Its intense toxicity nullifies its return. DDT and its Somers, residues of Gama BHC, Aldrin and Dieldrine have been noted in sediments in a number of coastal locations. Particularly intense concentrations have been noted at the river mouths of the main East Coast Rivers. Quantum of pollutants into the coastal ecosystem of India is given below: Sr. No. Input / Pollutant Quantum - Annual 1. Sediments 1600 Million tonnes 2. Industrial effluents 50 � 106 m3 3. Sewage - largely untreated 0.41 � 109 m3 4. Garbage & other solids 34 � 106 tonnes 5. Fertilizers - residue 5 � 106 6. Synthetic detergents - residue 1,30,000 tonnes 7. Pesticides - residue 65,000 tonnes 8. Petroleum hydrocarbons (Tar b***s residue) 3,500 tonnes 9. Mining rejects, dredged spoils & sand 0.2 � 106 tonnes (Elrich de Sa, 2003) Causes: Population growth: Population pressures consist of high solid waste creation, increased volumes of urban nonpoint excess, loss of green space and wildlife environment, declines in ambient water quality, and increased demands for waste water management, drinkable water and energy provisions. ...read more.

Act, 1974, amended in 1988: Control of pollution from land-based sources Pollution Control Board was constituted under this act. * Wildlife Protection Act, 1972 (Amended in 1983, 1986, 1991, 1997, 2001): Offers protection to marine Biota. Creates conditions favourable for conservation of fauna and flora. Amended in 2001 to include several species of fish, corals, sea cucumbers and sea shells. (Review of marine and coastal policies in India, Western regional centre, Goa) CONCLUSION: A methodical long-term research of pollutants, in a local context, and their special effects on biota is essential. Levels and allotment of contaminants require being calculated and monitoring over long periods of instance, in the water discourse, the sediment and the biota. Constant information on the sources of pollution, the routes of circulation in the surroundings and their growth through ecosystems, is necessary. Correspondingly studies on bio-concentration, bio-accumulation and bio-magnification of pollutants are required. The method for what parameters are supposed to be considered where, when and how frequently, is difficult. It needs vigilant preparation to maximise the information collected per unit of cost and attempt. Monitoring schemes in lookout organisms or option of bio-makers have to be cautiously measured to guarantee the natural availability of the same species along the Indian coasts. Alternative of diverse species for different areas has to be watchfully evaluated inside the lab and in-situ. Synoptic monitoring apparatus of moored buoys & remote sensing via satellites as well as by acoustics must be used where feasible. They are several most cost effective monitoring apparatus of current expertise. Excellence manages through corroboration and calibration protocols and experiments becomes a significant characteristic in this circumstance. Geographic Information System, a range of data bases, quick communication of alarms are additional tools for successful monitoring, along with hazard scrutiny and tragedy management plans. Sustainable growth can be defined as "the proper use and care of the coastal environment borrowed from future generations". For sustainable Coastal and Marine management there should be multinational approaches and conventions between Government, semi-government and private groups. Judicious and responsible application of scientific knowledge on all aspects of pollution is essential. ...read more.