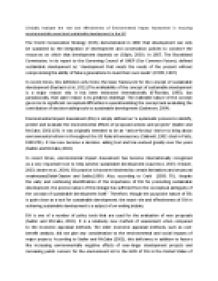 ﻿Critically evaluate the role and effectiveness of Environmental Impact Assessment in ensuring environmentally sound and sustainable development in the UK The World Conservation Strategy (WCS) demonstrated in 1980 that development can only be sustained by the integration of development and conservation policies to conserve the resources on which that development depends on (Gilpin, 2000). In 1987, The Brundtland Commission, in its report to the Governing Council of UNEP (Our Common Future), defined sustainable development as: ?development that meets the needs of the present without compromising the ability of future generations to meet their own needs? (WCED, 1987). In recent times, this definition only forms the basic framework for the concept of sustainable development (Buytaert et al., 2011).The malleability of the concept of sustainable development is a major reason why it has been embraced internationally (O?Riordan, 1993), but paradoxically, that same reason is its greatest challenge. The malleable nature of the concept gives rise to significant conceptual difficulties in operationalizing the concept and evaluating the contribution of decision-aiding tools to sustainable development (Cashmore, 2004). Environmental Impact Assessment (EIA) is simply defined as ?a systematic process to identify, predict and evaluate the environmental effects of proposed actions and projects? (Sadler and McCabe, 2002:103). It was originally intended to be an ?action-forcing? device to bring about environmental reform in throughout the US federal bureaucracy (Caldwell, 1982 cited in Petts, 1999:251). It has now become a decision- aiding tool and has evolved greatly over the years (Sadler and McCabe, 2002). ...read more.

This integration of EIA into planning and policymaking has been called by some as the "ultimate means by which sustainable development can be achieved" (Partidario, 1996:34 cited in Shepherd and Leonard, 1996:321). This view is supported by Devuyst et al. (2001) when the co-existence of a strong policy at the local level is necessary for the achievement of sustainable development. According to Petts (1999), the procedures and methods of EIA are largely intact in SEA; the two are therefore not entirely distinct. SEA has a wide perspective and a low level of detail and results in the production of a broad vision and overall framework while EIA has a narrow perspective and a high level of detail and results in the production of project-specific data (Dalal-Clayton and Sadler,1999). These can therefore be used complimentarily. SEA therefore can be used to streamline and strengthen the EIA process but it cannot replace it. EIA was introduced into the UK via the European Union Directive (85/337/EEC) on Environmental Impact Assessments. It was implemented in 1985 and has since been amended three times, in 1997, in 2003 and in 2009 (European Commission, 2011). The Directive was designed in a manner that gave the Member States ample discretion to incorporate the EIA practice into their individual legislations. The only condition was that, the basic principles and procedural requirements had to be satisfied (Lee, 1995). Within the United Kingdom, EIA is applied mainly to some major projects or developments which require planning approval from local authorities under the Town and Country Planning Act (Carroll and Turpin, 2002). ...read more.

With regard to the influence of EIA on final decision outcomes, Jones and Wood (1997) found that, over one-third of planning officers indicated that environmental issues were the major factor influencing the decision by the committee. In three of the cases, the inadequacy of information on environmental impacts in the ES was cited as one of the reasons for refusal. But then again, other views from planning some officers indicated that some decision outcomes would have still remained the same without the EIA (Jones and Wood, 1997). EIA practice in UK is not without some major criticisms. According to (Glasson, J. et al., 2005), these include the poor treatment of combined and cumulative impacts of a proposal where it is one of several in an area; a lack of attention to global impacts on air quality and climate and lack of consideration for alternative sites, processes or technologies. From the cited studies, it is evident that the quality of ESs are much better, EIA leads to modifications in proposals and that it contributes to the decision making process. EIA therefore has contributed to more sustainable development in UK since its implementation. These studies and others however suggest that this is not always the case hence; the full potential benefits of EIA are not being realized (Jones and Wood, 1997). There is still much room for improvement if its contribution to sustainable development is to be maximized. ...read more.