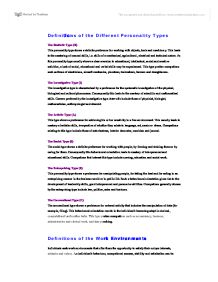 Definitions of the Different Personality Types

Definitions of the Different Personality Types The Realistic Type (R) This personality type shows a definite preference for working with objects, tools and machinery. This leads to the mastering of manual skills, i.e. skills of a mechanical, agricultural, electrical and technical nature. As this personality type usually shows a clear aversion to educational, intellectual, social and creative activities, a lack of social, educational and verbal skills may be experienced. This type prefers occupations such as those of electricians, aircraft mechanics, plumbers, toolmakers, farmers and draughtsmen. The Investigative Type (I) The investigative type is characterised by a preference for the systematic investigation of the physical, biological and cultural phenomena. Consequently this leads to the mastery of scientific and mathematical skills. Careers preferred by the investigative type inter alia include those of physicist, biologist, mathematician, anthropologist and chemist. The Artistic Type (A) This type shows a preference for achieving his or her creativity in a free environment. This usually leads to mastery of artistic skills, irrespective of whether they relate to language, art, music or drama. Occupations relating to this type include those of actor/actress, interior decorator, musician and journal. The Social Type (S) The social type shows a definite preference for working with people, by forming and training them or by caring for them. Consequently this behavioural orientation leads to mastery of interpersonal and educational skills. Occupations that interest this type include nursing, education and social work. The Enterprising Type (E) This personality type shows a preference for manipulating people, for taking the lead and for acting in an enterprising manner in the business world or in public life. ...read more.

The most obvious one is retirement and the changes that may bring. For those who are well prepared financially, this transition appears to be manageable. It is more difficult for those, whose declining competence forces them into retirement, and/or those who must reduce their standard of living markedly during retirement. Health problems can become more acute, and the person is faced with the major traumas of the death of close friends or spouse. Whereas one has spent one's life becoming independent, one now suddenly faces the possibility of once again becoming dependent. Death becomes a reality, the daily routine of life revolves increasingly around managing one's physical health, and withdrawal into self -preoccupation becomes a major threat to the person because his or her needs for others may continue to be high. If the person can work through the various tasks of old age, take stock of accomplishments, learn to value wisdom and experience more as actual skills and competencies decline, he or she can prepare for death with a feeling of integration and contentment. But the implication is clear - there are tasks to be accomplished right to the moment of death. There is never a time in the adult life cycle when the person can simply stop and coast. Instead, persons must learn throughout life to assess the tasks facing them and to cope with those tasks. Career Cycles and Phases The stages and tasks of the career cycle are closely related to those of the biosocial life cycle, because both are linked to age and cultural norms. One of the most important differences between the career cycle and the biosocial cycle is that everyone has a life, but not everyone has an occupational career. ...read more.

In analysing career stages it is better to view them as broad sets of common issues and tasks that everyone faces in some form or another, rather than to attempt to link them systematically to particular ages or other life stages. It also follows that the actual interaction of career concerns with personal and family concerns is not easy to predict across a broad population. One will find patterns only within given occupations, socioeconomic levels and organisational settings. Career Anchors As new employees, neither the organisation nor oneself can really know whether or not our abilities will correspond with the present, or future, requirements of one's job or potential career. As new employees, one does know how their values fit with those of the organisations. The new employee gradually gains self-knowledge and develops a clearer occupational self-concept during their early careers, and can be viewed as mutual discovery between the employee and employer. This self-concept has three components, which together make up what Edgar Schein calls the career anchor: 1. Self-perceived talents and abilities (based on actual successes in a variety of work settings); 2. Self-perceived motives and needs (based on opportunities for self-tests and self diagnosis in real situations and on feedback from others); 3. Self-perceived attitudes and values (based on actual encounters between self and the norms and values of the employing organisation and work setting). Career Interests People search for work environments, which provide them with the opportunity to satisfy their unique interests, attitudes and values. A person's behaviour, career choices, stability and satisfaction can be explained by the interaction between his/her personality traits and the environment. Occupational choices are an expression of one's personality, and generally, personalities of individuals in the same occupation correspond. 6 ...read more.